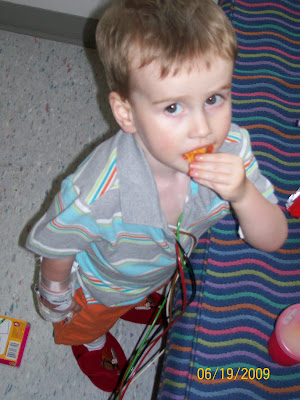 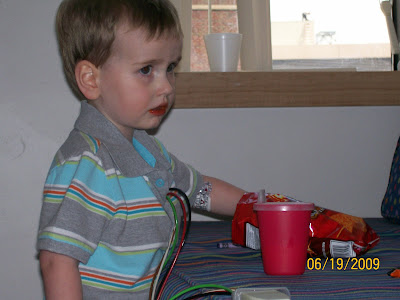 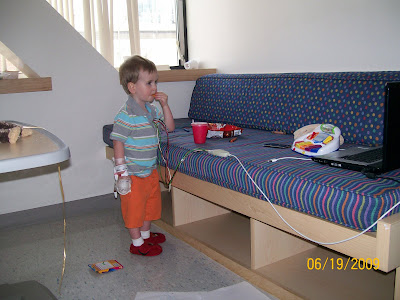 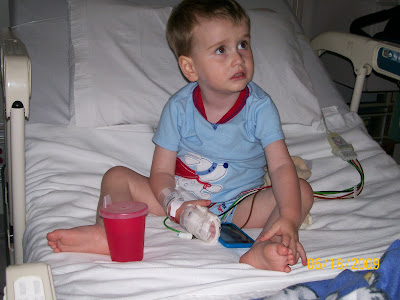 Watching TV and playing with Daddy's iPod--he's got it so rough! 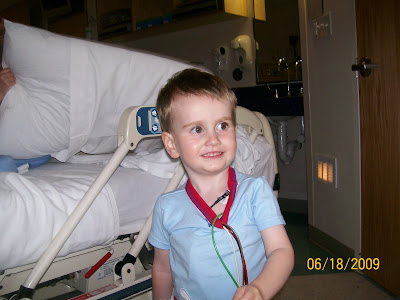 Doing his favorite thing in the hospital, pushing buttons on the bed!

We are still here (surprise! not!). Connie's roommate got sent home just in time for him to take an afternoon nap. Poor thing was inconsolable all morning. Her mommy tried everything, but to no avail. To make matters worse, he wasn't allowed to venture outside of the room b/c the portable telemetry devices weren't working properly! He didn't seem too bothered by her crying, but was definitely at the peak of boredom. We asked the nurse to have Child Life bring us something new to do and we got infant toys that you press a button and a thing pops up. I was hoping more like a truck he could push around, but oh well. He did name the animals that popped up and even tried to feed the frog some of his raisins at lunch. That was pretty cute. He didn't eat much breakfast or lunch, but he did have one good diaper and drank 3/4 of a sippy cup full of diet soda (I'm desparate at this point!). His IV was not flushing so we got that pulled too. Now he's just on the monitor. They are watching his intake closely though so if he doesn't start drinking a bit more, he may get a new IV tomorrow so they can deliver some fluids. We kept harping about getting out for a walk so after lunch we finally got to tour around on 7. I'd say the highlight of his day has been pushing the automatic door button on the wall. He goes right up to it and bounces around like he can't contain his excitement. It's hilarious. We took some hot wheels out in the hall and pushed them back and forth for a bit and then he got a 12 lead EKG. They said they'll be doing it daily while he's on an amiodarone load but this is the first day for it. They drew blood late this morning for his INR level and to get a baseline on his thyroid. This is so they will have something to compare it to in a couple of months when they check it again to monitor whether or not the amio is negatively impacting it.

I look for him to sleep until 4 (cross your fingers!) and then maybe we'll walk around some more before dinner. Greg is bringing the girls up around 6:30 so that will be fun for him.
Posted by Erin Beckemeier at 2:13 PM

I haven't commented in a long time, but have been praying for Connie for a long time. He has grown and looks like a little boy and not a baby anymore! Thank you for the privilege to read this and pray for your precious son.