If there was any doubt in our minds that Connie's recent behavior was not related to being two, that is gone after today. We had a few pretty decent nights and then last night he cried for 10 min. at bedtime, woke up at 1am and woke up at 3am crying. No, not crying--screaming. I've read about night terrors and I don't think that is it at all. It is that he wants to be with us, pure and simple. He's not getting his way when he has to go to bed and be away from us. It has carried over into daytime behavior a tad bit as well now too. Today Ms. Deb came for PT. He's been excited about her coming and anytime we even mention her name in our house, he starts showing off all his physical/gross motor abilities. After about 1/2 way through the session today, while he was showing all the wonderful things he can do, I stupidly thought how cute it would be to let him show off how well he plays learning games on the iPod. He showed her how he operates it and then when it was time to work on the next skill (standing on one leg), he freaked out and threw a major tantrum. He was mad that we took the iPod away. We even tried showing him that if he did the new skill once he'd get it back but he wouldn't even attempt it. We had Mookie do the skill and get the iPod as a reward and then we each took a turn. When it was his turn he just screamed louder! Deb tried coaxing him to do another skill (smashing paper cups with one foot) but that was unsuccessful too. He carried on for a good 10 minutes at least probably before crawling into my lap and putting his head on my shoulder. Ms. Deb asked him if he was just done and he said "Uh huh!" We talked for a minute about how it felt better to be calm and happy instead of screaming and mad and he all of a sudden got up and started smashing cups. I don't know if his short term memory just "forgot" about the iPod or what, but he seemed to be over it and cooperated the rest of the time. What a stinkerpot!!!

One funny note to add: Greg has been trying to get that boy to say "Daddy" for about a year now. Everytime he learns a new word or we are practicing words with him, Greg requests for him to "Say Daddy" and all we ever get in response is a laugh or a throaty sound he makes when he thinks he's being funny. Well lately, he's been saying "Greg". It must be my fault, for hollering from the floor I'm on to Greg (on a different floor). We were at my parent's house and someone said something about "Where's Daddy?" and Connie suddenly started walking around yelling, "Graaaaiiiiigggg". Then the next morning, we woke up to the sound of him standing at the gate at the top of the steps yelling down to us, "Graaaaaiiiiiig". Greg told him he didn't know they were on a first name basis!
Posted by Erin Beckemeier at 9:57 PM 2 comments: 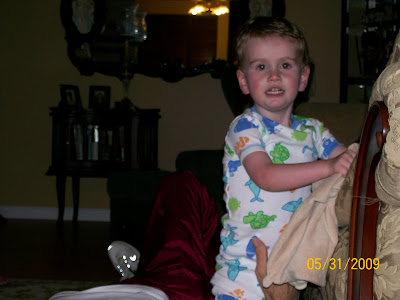 We ran Connie's insomnia by Dr. Bromberg, just to make sure it wasn't caused by a med he's on or that we're missing something related to his cardiac function. Dr. Bromberg thinks he's just being a stinkerpot and said to make sure he gets plenty of fresh air during the day and suggested we take him swimming to wear him out and cut naps short if need be to make sure he's good and worn out at the end of the day. Well today it worked! Although I don't think he was quite ready to be done partying because he ended up going into the girls' room and crawling up into the bottom bunk and falling asleep!
Posted by Erin Beckemeier at 10:59 PM No comments: