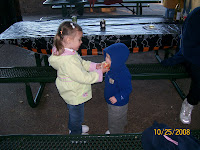 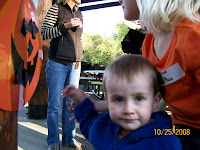 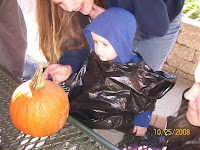 Connie's Great Aunt Barb hosted her annual Halloween Party this afternoon and Connie was such a good boy (as usual)! The kids had fun painting pumpkins, playing pin the nose on the jack-o-lantern, eating apples off a string and playing a dress-up relay game. He showed off his ever-growing motor skills on the playground by navigating the equipment like a pro! Grandma's iced brownies were a hit with him too. I don't think I've ever seen him open so wide.
He wasn't too sure about the painting thing. I think he was a little concerned about wearing a trash bag. I know, I know. I can't believe they are sharing food either (germs--eek!)! It does make for a cute pic though.
Posted by Erin Beckemeier at 9:29 PM No comments: