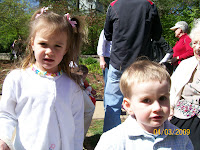 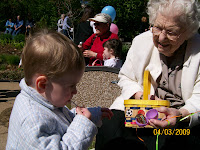 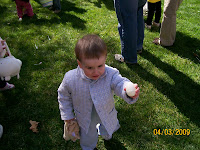 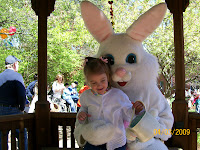 Connie and Mary Kathleen attended the big Webster Groves Easter Egg Hunt at Bethesda Orchard this past Saturday. Great Grandma O'Leary invited us and living with Bunny Girl, we never pass up an opportunity to visit with the Easter Bunny himself! First was the hunt for 1-3 year olds. Connie wasn't sure what all the fuss was about as last year he was not walking and not even eating and pretty much confined to the stroller the whole time. This year he gladly picked up eggs but was much more concerned with shaking them and finding out what was making that noise than actually scooping up as many as he could. He found about four or five and then made his way over to Great Grandma to help him with opening them. Once he discovered there was candy inside he was thrilled. He LOVES chocolate!

Then it was on to Mary Kathleen's turn, the hunt for 4-8 year olds. I use the term "hunt" loosely. The children did not have to search for eggs. The eggs were just strewn about the lawn so all they had to do was pick them up. Given the fact that she is not aggressive and was at the back of the pack, she did not get a single egg! 3000 eggs were scooped up in a "record" (according to the announcer) 52 seconds. The child was obviously distressed about this and was not herself. I'm not making excuses for her because she made some poor choices in her behavior, but I do feel sorry for her at the same time. It is so hard to be a parent! Unfortunately we had to leave the egg hunt early and miss out on the raffles and snacks. There's always next year, I guess!

Here are some pics from the day:
Posted by Erin Beckemeier at 5:27 AM 1 comment: