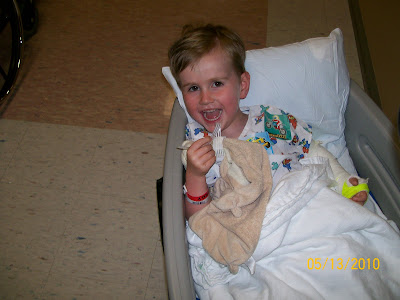 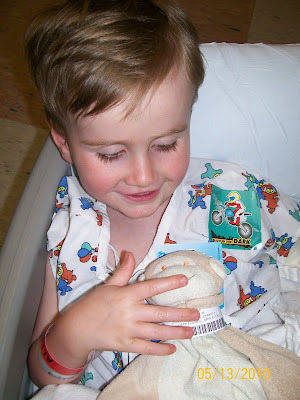 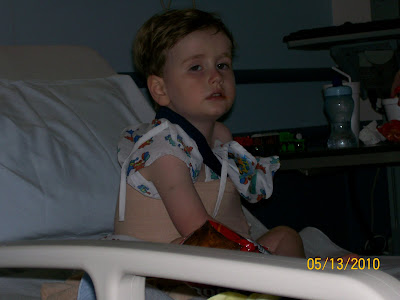 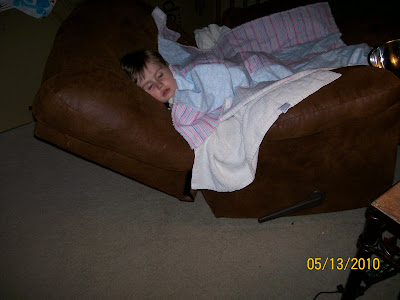 He got tons of compliments on how well he handled the day. They say most three year olds don't do nearly that well. God sure blessed us, didn't he?
Posted by Erin Beckemeier at 10:35 PM 1 comment:

Just got back from the orthopaedic doctor's office. Should have known by how the morning started out what he'd say. First off, on my way there something hit the windshield and it's got a nice crack now. Then, I mistakenly went all the way in to the Ballas office when his appt. was at the O'Fallon-Progress West office. Then we get into the office and Karsten woke up starving. I guess I should have assumed we'd get bad news after the x-ray. Dr. Stazzone came in and laughing, asked if he'd fallen or hurt it again somehow. Yesterday he was ramming himself into the couch and did jam his fingers and at that time he complained about his arm hurting again. I'm assuming that's what knocked it out of alignment because it wasn't that crooked when he first broke it. The doctor said he has to get this done soon so that it doesn't permanently heal in a v-shape like the x-ray shows now. They split his cast and taped the outside to stabilize it somewhat until his surgery tomorrow. He has to be there at 10am for a 12pm surgery time. He will get anesthesia and then they will yank on it until they get it back into alignment. They said he'll be given a prescription for some pain meds as he will be hurting afterward.

Please keep him in mind tomorrow and pray that he won't be scared and that he won't start hating "Dr. Bromberg's hospital". Perhaps they should change the name of St. John's to Dr. Bromberg's Hospital because that's what he says every time we pull into the parking lot. He's agreed to get a soccer ball cast so hopefully he won't glow in the dark anymore (haha). We'll let you know how it goes when time allows.
Posted by Erin Beckemeier at 1:31 PM 3 comments: 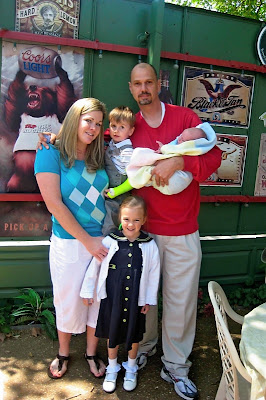