Back to the ER 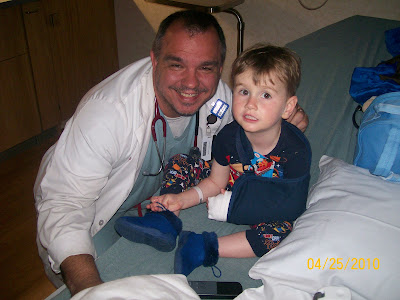 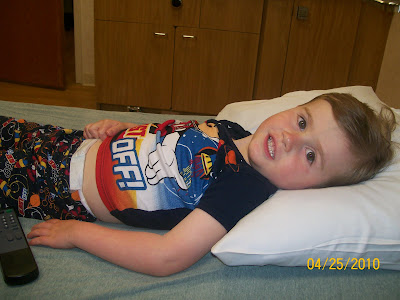 Connie went back to St. John's last night. This time for a broken arm. He was chasing Mookie and she ran down the steps. He tried to push her and missed and his momentum carried him forward down 12 of the 14 stairs. Thankfully his head wasn't injured! And sadly I have a feeling this still won't teach him any lessons about leaving her alone and refraining from constantly aggravating her. If he's anything like me, he'll just use his new cast as a weapon to hit his siblings with (I'm told I was pretty rough on my brother Terry when I had a cast at the age of two). His radius is broken clean through and his ulna has a buckle fracture. The orthopedic doctor thinks that because of his young age it should heal up nicely. He's got a splint cast on now to allow for the swelling and in a few days should get a real cast that goes above his elbow. ER doctor told us that he'll probably be in that one for three weeks and then if all is healing nicely he'll get a cast that goes just below the elbow for another three weeks. For now he can't get it wet at all. It's on his left arm and he's left handed by all accounts so we're not sure how that's going to play out with eating and playing, etc. The cast covers most of his fingers so he really can't use that arm/hand at all. I'm not sure how holding a cup to drink is even going to work. This could be very interesting! He was so brave in the ER and told all of the nurses and doctors all about how he did it all by himself, without me having to explain it for them. His speech sure is taking off. One of them mentioned what a big job he has now that he's a big brother and he associated that with his jobs at school so he told them how he gets turns to be line leader and clip board holder, etc.
Posted by Erin Beckemeier at 6:37 AM 3 comments: