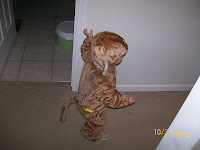 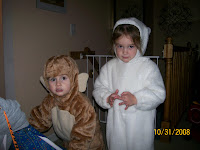 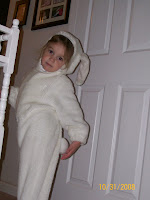 Connie made his debut as a Monkey and Mookie recycled last year's Bunny costume (how could she be anything else?) for the big trick-or-treating fun on Halloween. He LOVED going up to the front doors and meeting strangers. If the house was decorated, he was entranced. The scarier the house, the more sound effects, the crazier the scene, the more he loved it. It was tricky though because he's pretty independent now and let's just say if he was a dog you would have to say, "Does not walk well on leash." He doesn't want to hold your hand and he's not really consistent with following directions if he doesn't like what you are saying! So, he took turns being carried, spent some time in the stroller and did a bit of walking.

Here are a couple of pics.
Posted by Erin Beckemeier at 9:29 PM No comments: