Some pics from Saturday. We had a picnic at the park--Yes, he can climb the blue ladder all by himself! 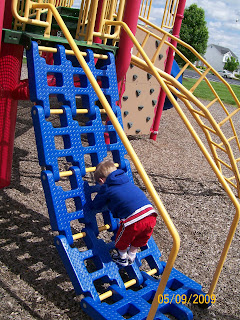 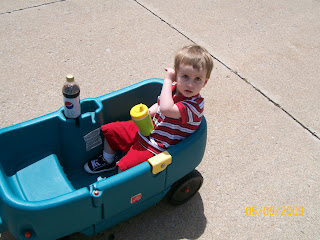 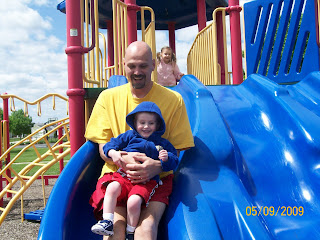 Today was a busy heart day! Connie went right after breakfast to have labs drawn to check his INR levels so that we would get the results in time for his appointment with Dr. Bromberg this afternoon. He was brave. I fear that next week when it is time to get them drawn again, he will not go in so willingly. He's such a smart boy I'm sure he'll recognize the place. He ate even better today than he did this weekend. He had a whole hot dog for lunch and ate a full serving of peaches. On the way to the doctor he had some peanut butter crackers and a whole sippee cup of milk/half and half! Colleen and Kelly and everyone in the office was so happy to see him looking better! Kelly and Colleen were especially impressed with him when he showed off his jumping and his iPod Touch skills. Colleen listened to him, asked lots of questions about his sleeping and eating, took BP and did an EKG. He was a little concerned about the BP check but we assured him that there would be no "owies". He even helped put the stickers on for his 12-lead EKG. He still has adhesive on his skin from all the stickers in the hospital. Oh well, what's a little more?!
Dr. Bromberg came in and commented that Connie looked a lot better than the last time he saw him. Connie showed him the "Melmo" movie he was watching on the iPod and Dr. Bromberg listened to him. He said his liver is still enlarged but was happy to hear that he's not napping more than what's normal for him. He said he wants to see us back in 10 days to look at him again and make some adjustment to the pacemaker. For now he wants to leave it alone. The best news is that he will likely take Connie off the coumadin in 2-3 weeks! He doesn't think he wants him on it the full three months that Children's had said so that sounds a lot better to us! It means less pokes, less bruises, less medicine. We're also going to alternate the doses some, taking 1mg three days a week and 2mg 4 days per week.

We're going to check him with a stethoscope a couple of times a day while he's awake and if his heart rate is fixed right at 100 bpm while he's awake, that is a sign to us that he's stuck in Atrial Flutter again and the pacer is pacing him at 100. So that's what we'll do. Please pray that this does not recur any time soon.
Posted by Erin Beckemeier at 5:54 PM 1 comment: