After two visits with Dr. Noble, an oral surgeon at St. John's, it's been decided that Conway will have his extra tooth removed at some point next summer. The doctors all put their heads together and would like to wait so that he's a little bigger which will make the anesthesia people a little less nervous and hopefully also give the tooth some time to move down in a little better position. He's fairly certain that the front baby teeth will have to be sacrificed in order to extract this one so that means Connie will be toothless in front for a few years :( Like my mom said though, at least he'll be here!

On a medical front Connie's doing so well. He's went to a kickaroos soccer day last month and has been jumping in bouncy houses at fall festivals and acting like a regular three year old for the most part. He's been to see the ped a few times lately with viruses (he gets EVERYTHING!) but has been handling them better than even this past summer when he got sick all of July. At school his teacher reports that he's now doing all the climbers-even the rock wall-to access the play equipment which is a big milestone for him (and a goal on his IEP).
Here he is climbing the big ladder up to the top of a tall inflatable slide--NEW SKILL! 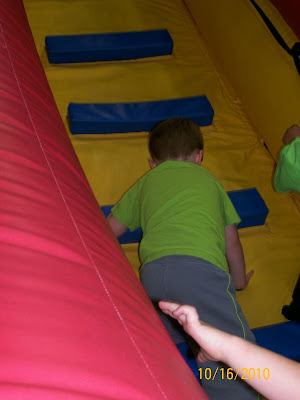 For Halloween he was, you guessed it, a bowling pin. His Grandma Marybelle made his costume and it was perfect for him. He got so many compliments and a ton of laughs when he asked people, "Why didn't the skeleton cross the road?... Because he didn't have any guts." He's talking and singing constantly now. We are trying to be supportive, but I have to admit there are times I wonder why it was I prayed so hard for him to learn to talk, haha!! Five minutes peace, ya know?
Here he is with Wonder Red (Reading super hero with "word power" from the PBS show Super Why!, aka Mary Kathleen) 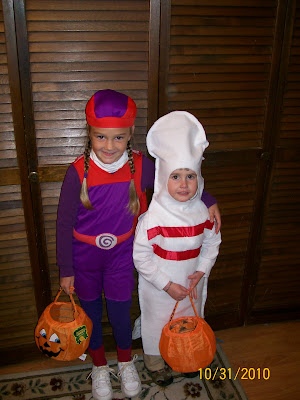 Posted by Erin Beckemeier at 9:12 PM No comments: