The 2008 Heart Walk is coming up on May 3rd. Mark your calendars now and plan to join us at Frontier Park in St. Charles as a part of Team Care4Conway. We are so excited to be able to have this opportunity to be a part of something tangible to help raise awareness and funds for heart defects research.

Click here for info on the walk and you can register to walk right there. Be sure to put that you are registering to join the team "Care4Conway" (no spaces). If you can't walk, you can make an online donation. You would go to "General Team Donation" just to donate or "Team Page" to join and walk.
If you have any questions, please email Erin at ekbeckemeier@yahoo.com! Our goal is 20 participants, but I'm sure we can get a lot more than that. Depending on how many we have, we may get special Care4Conway t-shirts printed up to wear that day.
Posted by Erin Beckemeier at 9:40 AM 1 comment:

Photo and video editing at www.OneTrueMedia.com
Posted by Erin Beckemeier at 9:59 AM 4 comments:

Steady as a Rock

Conway got weighed this morning and is up another three ounces! Yay! I was starting to stress out a little since he was hovering at that 22 lb mark for so long and debating with myself over whether or not to fortify the daytime feeds to increase his calories or keep his daytime feeds at 180 ml but increase his night time feed back up another 40 or 80 ml. My stress was relieved today when the nurse told me that she calls and leaves a message every week for the GI doctor telling her the weight and if she was wanting us to adjust his feeds/increase his calories, she'd call us or have us come in for an appt. to discuss. I just feel like the pressure is off me now and I can let the doctors decide!

He needs to get to sleep for his afternoon nap (so he's rested for his PT this afternoon) but he is in there just talking away. I think he's experimenting with language a bit and likes to hear himself so I'm not upset in the least. It is actually reassuring that he is doing this. The other day Greg was changing his diaper (yes, he does occasionally do this:) and Connie was rolling all over and hard to wrangle and get the new diaper on. Greg looked at me as if to say, "I wish he would sit still" but I quickly reminded him that we ought to be incredibly thankful that he's finally moving a bit more and wants to get around and explore.

We think he's getting closer to crawling. When positioned, he'll stay on all fours and hold his head up for a few seconds. He's just not the type of kid that is highly motivated to move. He'll reach a time or two for an object that is a ways away from him and if he doesn't get it, he doesn't fret. I guess what I'm trying to say is he gives up easily! Oh well. I guess we just haven't found the right toy to motivate him with yet!
Posted by Erin Beckemeier at 2:12 PM 1 comment: 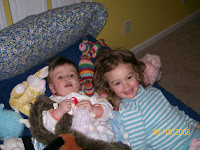 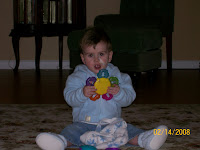 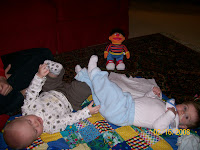 Connie got his first "toothbrush" today. It's a little rubber brush that fits onto the end of my finger and it came with some fluoride-free toothpaste. I hesitated to get it because I was pretty skeptical about his willingness to allow me to brush his teeth. Most normal kids aren't too keen about getting their teeth brushed at this age, let alone a kid with the oral aversion issues he's faced. To my surprise, he loved it! The first taste of the toothpaste caught him off guard, you could tell, but he quickly began to enjoy the ticklish feeling he got from me rubbing his teeth and gums. This kid surprises me every day.

He's advancing toward the goal of all feeds being during the day. He now gets 180 mL (six ounces) four times per day and his overnight feeding is 370 mL. We are fortifying the overnight feed to 24 calories/ounce using Pregestimil (a predigested formula added to the breastmilk). His weight has been steadily hovering around the 22 pound mark so we'll see if adding the fortifier to the daytime feeds is on the horizon when the dietician comes this Friday.
Posted by Erin Beckemeier at 9:07 PM 1 comment: