He's had a sippy of water with him all day and at meals he's been given peptamin to drink. He's doing better with the peptamin. At least now he's not making the face that says, "What is this? Where's my skim milk?"

Just thought you guys could say a prayer asking God that this pattern continues and his oral intake continues to increase. He's been without his tube since late Friday morning. I've put in a call and emailed his therapists about "the new plan" so we'll see what tomorrow brings. One day at a time, right?
Posted by Erin Beckemeier at 9:45 PM 1 comment: 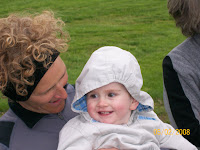 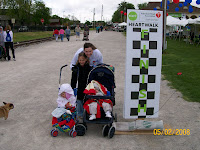 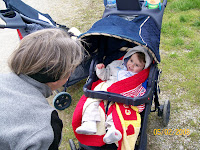 A big thank you to Connie's fan club for braving the gusty winds and cool weather to come out for heartwalk this morning. It was great to see Grandpa George, Great Aunt Barb, Meghan and her friend Emma, Nicholas, Mary, Clare, Cece, Mary Kathleen, Kathy Brown, Judy Schoene, Mary Ann Lyons, Carol Stadler, the Dietrichs and Aunt Julie. Connie even did a little walking (holding on to my hands, of course) himself. Your time and donations to the American Heart Association mean so much to us. And yes, my goal for next year is to get his face on one of those Survivor posters. He's more than a survivor, he's thriving!
Posted by Erin Beckemeier at 4:20 PM 1 comment:

I had to share this heartwarming compliment that Connie received today from his Occupational Therapist, Carla. We were finishing up his therapy session and gave him a peanut butter cracker. He excitedly took a bite and promptly gagged and threw up. He proceeded to gag and choke on phlegm for a couple more minutes before finally collecting himself. He immediately was playful and willing again to keep trying to eat (we didn't make him do the cracker again). She said, "Wow. He's got such a great personality. He just gets right back up on that horse every time, doesn't he? It just amazes me that he's so willing." I shared with her what Deb, the PT, said about him last Friday about being so impressed that he's willing to try everything she asks and isn't fearful of trying new things. Carla said that most kids have a lot of behaviors and crying and get upset when they throw up. Not our Connie. He just carries on. Then Carla said that that trait of getting back up and dusting off will serve him well as he gets older. That got me to thinking that maybe that's one reason God's letting us keep him here with us. Because we can learn from him. He's not 14 months yet and has already taught us so much.
Posted by Erin Beckemeier at 3:12 PM No comments: