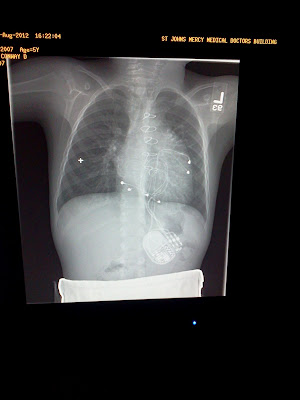 Dr. Bromberg was happy to hear that his energy level seems back up to where it was pre-surgery. He believes it is a great sign that he's already at that point and we're still less than 3 weeks out. He said that improvement may even take 6-9 months before we see him look more like his classmates. We have to remember that because he's been "tired" for several months and not as active, he's not in tip top condition. It could take some time for him to get stronger and faster. I really am not worried if he never runs up a set of stairs. I am just happy as long as he is not going backwards in energy and stamina! The doctor also looked at his incision where the stitches are poking through in a couple of spots. He thinks it is best to leave them be for now, hoping they'll dissolve and fall off soon. We're just keeping an eye on the area around, that it doesn't get redder or drain. We go back October 1st for another follow-up, including an echo. Hopefully it's smooth sailing until then!
Posted by Erin Beckemeier at 9:22 PM No comments: