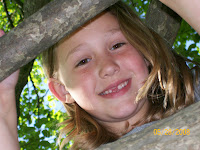 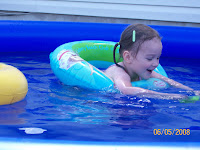 Connie seems to be feeling better as indicated by a somewhat increased appetite and playing independently. Yesterday he drank a good amount (about 16 oz. total) but didn't eat much and today he ate his normal amount but drank almost nothing (maybe 4-6 oz altogether). He's back to totally blended foods, per the recommendation of his OT. She NEVER has us go the "easy" route and is usually all for challenging him with different textures. But after seeing him Monday morning during his therapy session she said we have the okay to go back down to the blended soups and baby food consistencies. He wouldn't eat anything but a couple bites of yogurt for her. He will nibble on crackers and cookies while he's being fed, and getting the full amount in him has been difficult, but he's doing it.

The more exciting news, for me anyway, is that he's been going to sleep on his own the last few days. I have been putting him in his crib, on his belly, and leaving him. I noticed he was struggling to get comfortable as I continued trying to pat, shush, rock, sing (you name it, we were trying it) and he sat up in bed and then laid down on his tummy. He seemed to like it so now I've been putting him in on his belly. It's like it's signaled something in him that tells him it's time to sleep and not play around, etc. I just looked at him and told him I had to go out to the living room and fold laundry but I'd be right back to check on him. He let out three little whimpers and I never heard another peep. When I told Greg how easy it was he said, "Who'd have thought all this time all we had to do was reason with him?!" Cross your fingers that this new "phase" holds and that we can all get some better sleep from here on out--not to mention, get something done during the day now that he's napping better. Lately I feel like all I do is try to get him to sleep and eat. Literally.
Posted by Erin Beckemeier at 9:42 PM No comments:

Believe it or not, he's sick again!

Friday evening Connie had a very hard time going to bed. He has been struggling with sleep ever since he learned to crawl and eat, but this was different. He could not stay asleep and was breathing extremely fast (almost panting). And it wasn't as if it was breathing fast after crying. He wasn't even crying. His heart seemed to be pounding in his chest like he'd just been working out. At 1 am he woke up and stayed up. Around 4:30 this was still going on and I got Greg up to see what he thought of it. We decided to call the cardiologist's exchange and it turns out Dr. Bromberg, our doctor, was on call. I felt bad calling so early, but I was concerned that Connie might be having rhythm issues with his heart. He told us to take him to the ER thinking he might be in Atrial Flutter. The good news about having a pacemaker is that his rate can't go too high. The problem is that he could be in atrial flutter a long time and it go undetected because of the pacemaker not letting his rate go so high. They hooked him up to the telemetry and did an EKG, which looked "funny" but they weren't sure how his were supposed to look. They sent it to Dr. Bromberg who decided to come in himself and take a look. He got a chest x-ray which actually looked better than the last time we were there. We had the same doc in the ER that admitted him a few weeks ago. Dr. Bromberg brought the Medtronic thing a ma jig and interrogated Connie's pacemaker. He could tell from that that Connie was not in Atrial Flutter (thank God!) and that from a cardiac standpoint he was fine. His heart rate had gone back down to normal by this point so he told the ER doc that who then decided to discharge us. They labeled it an "upper respiratory virus" even though he had no symptoms except the breathing fast and we went home. We got home about 9:30 or so and I tried to feed him but he wouldn't eat. He took a good nap (probably since he'd been up all night!) and wasn't really interested in lunch when he woke. The afternoon nap turned into a huge battle and he was burning up. We took his temp and the thermometer shot straight up to 102 degrees and got there quickly. I gave him some tylenol and called the pediatrician. The doctor on call was someone I've never heard of and is not in our ped's practice, but I told her the story of the past 24 hours and even the hospital admit from a few weeks ago along with some background on his cardiac diagnosis. Once she heard he had a fever she said, "That explains it!" It's another virus. Give him tylenol or motrin and let him eat whatever he will eat. What?! We keep him inside all winter for fear he'll get sick and now the weather is warm and there aren't supposed to be so many germs out there and he's gotten sick back-to-back. He had a slight fever this morning but with motrin has been somewhat himself. His appetite is not great and he's not drinking much, but he also doesn't have vomiting or diarrhea like last time. I'm hoping he'll eat more and more each day and avoid dehydration. Last time, he got rather "dry" and came pretty close to being admitted for IV fluids. Please pray that he'll continue to feel better and eat more and avoid any further illnesses this season. I'm sure part of the problem is he's been exposed to so little because of staying home all winter, but what can you do?

So, that's our news. Oh, I almost forgot to add. I think they think some of the trouble he was having with getting comfortable and sleeping was because we've reduced his prevacid for reflux so they called Dr. Brady and she said to up it back to where it was. Now that he's had the fever and we know something different was going on I think it's safe to go back down, but we'll wait till he's feeling and eating better and then give her a call to see what she says.
Posted by Erin Beckemeier at 10:07 PM 1 comment: