The first part of that title stands for honoring Conway's birthday this past week. On March 3 he turned four years old! Can you believe it? He wore his new bowling shirt to preschool and took bowling ball cupcakes to share with his class. Grandma and Grandpa George took us to Red Robin for dinner and we came back to the house for cake again! I think his favorite part of the day was wearing his shirt and getting a balloon from the restaurant. He just doesn't like for Karsten to play with his balloon! 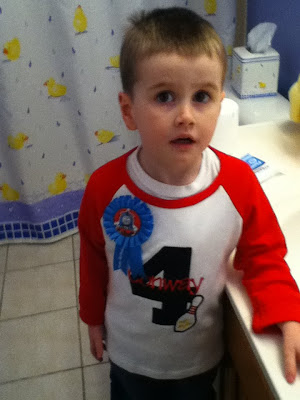 The latter part of this post title is in reference to the fact that we often are forced so quickly out of the celebration mode and thrown into the reality of everyday life with Connie. On his birthday, he was sent home from school with a report from a vision screening that was performed there saying he needed to be seen by an opthamologist due to having a suspected lazy eye, or amblyopia. This was a shock to us as he has been followed by a phenomenal eye doctor since he was 7 months old, having check ups every six months. We were surprised at this development. We called his eye doctor's office and have a follow-up scheduled for March 21st. They did say that sometimes the screening tool can have a false positive, but that it is usually fairly accurate. Then Thursday night Connie spent most of the night coughing a barky cough. We thought for sure it was croup, as it sounded just like it. He visited Dr. Davis Friday and instead of coming home with a diagnosis of croup, we've now added Asthma to the list, along with three more daily drugs; nebulizer treatments of an inhaled steroid every four hours until he's able to go 48 hours without coughing, an oral steriod twice daily and an allergy tablet! He spent both Thursday and Friday nights awake, scared and struggling to breathe. The only relief we found was a steamy bathroom. Prayers that tonight is peaceful and restful are much appreciated. It's already 9:45 and he's still wide awake (of course that's thanks, in part, to the albuterol he's on) and coughing constantly the second his head hits the pillow. Right now his pediatrician thinks that his asthma is the type that is triggered by a virus and while most kids can shake it after a few days, it seems to linger and linger in asthmatics and they need breathing treatments in order to get over the hump and get better. We've even seen that be the case with Mary Kathleen, but we've never seen any of our children struggle so much for a breath. It was truly scary to witness. 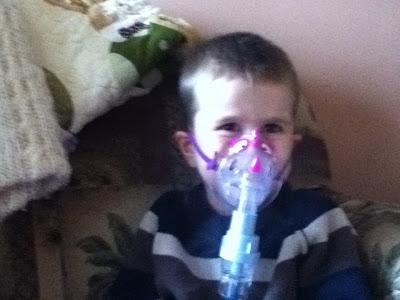 Sometimes around here it kind of seems like the terror alert system that went into place in the US after 9/11. For today we're still doing what we do, just with a heightened sense of angst, alertness and worry. Our family's "threat level" is elevated for the moment. As always, we welcome your prayers and thank God that we're not in the same boat as many of our heart friends and families tonight. This has been a rough winter for many and so many are struggling with illnesses right now. If you have a moment, ask for healing and health for those kiddos too.
Posted by Erin Beckemeier at 9:26 PM 1 comment: