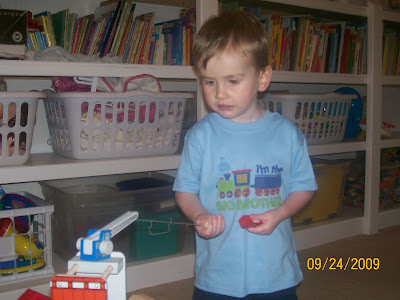 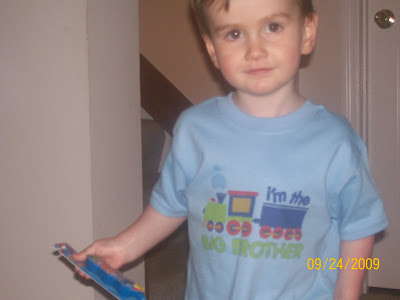 Connie's speech is improving by leaps and bounds! Today he said several PHRASES! Mookie had the iPod and he wanted it so he said, "I wanit" (I want it.). I had been telling him it was Mookie's turn and he'd get a turn later and when we got home he started toward the front door and then turned around and reached out with both hands and said, "My toon" (My turn.). He has a little string of lights in his room of cowboy hats and we turned them on for the first time today but unplugged them later and tonight he asked to "Pug it" (Plug it). This is so exciting!

Tomorrow he's going to the dentist, but just for a look. He's not taking any antibiotics before hand because they aren't going to do anything in his mouth but take a look, count teeth, etc. No cleaning or scraping or anything that might make his gums bleed. He's going to get his flu shot soon, but we'll wait until after he's six weeks post-op for that. Hopefully an H1N1 shot will be available for him too. His cardiologist wants him to have it.

Other than that, not much is new around here. He's been, according to Greg, more active than he's been his entire life. He spends his days standing at the train table, going up and down the stairs, sliding and swinging at the playground with Mary Kathleen and doing everything in his power to aggravate her when she's trying to do anything that little brothers can possibly mess up. She's trying to learn to "ignore" but if she's anything like her mommy, that's a lesson she'll never "get".
Posted by Erin Beckemeier at 8:25 PM 4 comments: