Pics and video from the last two days (including cath day) 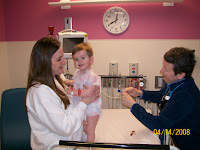 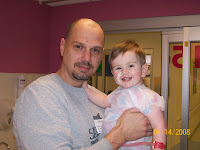 Photo and video editing at www.OneTrueMedia.com
Posted by Erin Beckemeier at 10:23 PM 1 comment:

Title says it all.
Posted by Erin Beckemeier at 7:28 PM 1 comment:

Woke up at 3:15 screaming until 4pm. No tricks worked. The plan is to tolerate a feeding and get Connie back home. Mom is currently holding him and he's getting heavy but it's the only way to comfort him. Every time she sits down he goes ballistic.

We're hoping to get out of here at 5:30pm, but that depends on how well he does with the feeding he's getting right now.

So far so good and no throwing up.
Posted by Erin Beckemeier at 3:55 PM 1 comment:

We just met with Dr. Balzer and got the report and viewed the cath. He has considerable narrowing in the pulmonary artery going to the right lung. That is where they ballooned and the balloon made no difference in pressures. It went right back to the way it was. During the cath, his pressures in the RV were about 2/3 of the LV. This is too high, but also a bit misleading. During sedation, pressure drops from around 100 to 70, so a reading in the RV of 55-58 seems really high compared with 70, but not so high compared to 100. He talked to Dr. Bromberg during the cath and decided not to go ahead with a stent at this time! Yay! He said he can probably even go home tonight! We are thrilled. We follow up with Dr. Bromberg in a month. He thought we'd most likely do another cath in a year to two years, but Dr. Bromberg will decide that based on other tests over time. I asked how the RV-PA conduit looked and he said it looks good and if it stays as good as it is now that he can go 5-7 years before having it replaced! Initially, after surgery, we were told 3 mos-3 years, so this is outstanding news. No more open heart surgery for at least five years (for now, anyway). He also has two leaky valves but the leaks appear to be mild at this point. I told him that they had been calling it Severe Neo-Aortic Insufficiency and he said that over time with improved heart function, that the leaks can improve and that appears to be the case. Yay again! Also, we could see the two residual VSD's but they are very small and pose no problems to him.

Thanks for the prayers. Now we just need prayers that he'll wake up and then that he'll be sleepy again for the length of time that he has to lay flat (six hours, I think). They said they can give him something to help, but we're dreading keeping him happy and flat for that long.

Erin and Greg
Posted by Erin Beckemeier at 11:09 AM 3 comments:

Heather just came in to tell us that they have started ballooning. Ugh. This means that he required an intervention and we are definitely going to be admitted for an overnight stay. When Dr. Balzer came in to talk this morning, he said he didn't think ballooning would work so now we are kind of expecting that they'll have to stent it:(

Pray that if this is the case that he does not develop a big leaky pulmonary valve.

I feel like the wind just came out of my sails.
Posted by Erin Beckemeier at 10:00 AM 9 comments:

They took Connie back about an hour ago. He got a little versed in his tube before hand and it kicked in quickly. He was carefree and zombified in no time at all!
They told us they will come with an update around 10-10:30. The procedure is supposed to last around three hours. We are waiting in a private room where he will "recover". This is our first experience with Children's Hospital and we are very impressed. From the atmosphere to the staff, it has been top-notch. I feel like writing them a letter to tell them so!

Dr. Balzer came in before they took him and reviewed the procedure and the possibilities. He "doesn't think" he'll have to do anything, based on what he saw on yesterday's echo. He said that the branch pulmonary arteries weren't visible in that study so he's not certain. He said if intervention was needed he doesn't think ballooning would work and he'd probably have to use a stent. The problem with stenting is they have to use an adult sized stent which would cause a pulmonary valve leak. I moaned about that because he's already got such a bad leak on the aortic valve. He said that he's actually got some leakage on both valves at the present time but that they are both MILD. He said that from what he saw yesterday they are MILD leaks. I wasn't going to argue with him. He's the doctor. If what he says is true, though, that means that Connie's Aortic insufficiency is not mild, not severe! Praise God. I guess He kept His promise when he told us on Easter that it was time for Connie to be healed. Slowly but surely, his heart is getting better!

We'll update more when we hear. We've also got some cute pics from this morning but I forgot to bring the cord to upload them.

Thanks for checking in.
Erin and Greg
Posted by Erin Beckemeier at 9:32 AM 1 comment:

Prayers for a Good Cath Needed

Please pray for a safe trip to Children's this morning (we are leaving in a few minutes) and that all goes well with Connie's cath today. He is first case, so around 8 or 8:30 cst is when they will get started.
Posted by Erin Beckemeier at 6:00 AM No comments:

Connie is on the Move

Today Connie got himself to a three point stance and up on all fours a few times without any help. He is right on the verge of taking off. He even moved one leg and one arm forward in an attempt to crawl toward something. Not to fetch a toy, rather the box of toddler wipes! He "hops" on his bottom and is especially mobile on the tile floor in the kitchen. Slippery surface = Easier to move.

Make an on-line slide show at www.OneTrueMedia.com
Tonight he "rode" on the ride on toy all by himself and actually made it move. This is a first! Granted, he could only navigate it backwards, but a feat nonetheless. I was proud of him for even balancing so well on it. He probably stayed on the thing at least 30 minutes with absolutely no help. Here's a little video. He stopped moving so much once the camera came out--typical! Oh, and please disregard the fact that it is a pink Disney Princess Ride On. It was Mary Kathleen's. My advice to new parents: Buy gender neutral "big" toys, especially if you have a girl first. No one bats an eye when a girl rides a black bike or blue scooter, but give a boy a pink ride on and you are asking for looks!
Posted by Erin Beckemeier at 10:49 PM No comments: