Conway from 2nd Birthday until Now

Photo and video editing at www.OneTrueMedia.com
Posted by Erin Beckemeier at 11:19 PM No comments:

I got behind on making little video montages so here a brief rundown of our boy from one to two years old. It's less than four minutes long.

that he wants the cardiac cath and EP study done there at U of M. On Monday, 8/24, Connie will have a super busy day. He's set to have his pre-op work-up, cardiac cath and EP Study all done in one fell swoop! I sure hope they have sped up the pre-op work-up process since last time it took 8 hours! If it takes that long this time, they'll never have time for the rest. Kim at Dr. Bove's office called this morning and said that the EP Study is what should take the longest. So, we'll need to be up there no later than Sunday night and then after his big day on Monday, he'll have two days off before Surgery Day. She didn't say whether or not he'll be admitted Monday night. It may depend on how late he comes back from the cath lab. With having all that testing early, he may not even get in there until the afternoon and who knows how long it will take them. They may just keep him there overnight for observation and then let us go early Tuesday morning.
Our happy boy is feeling better! 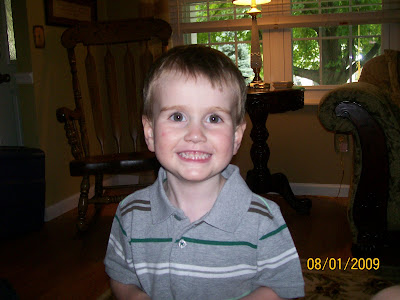 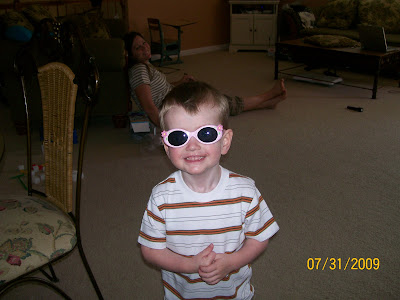 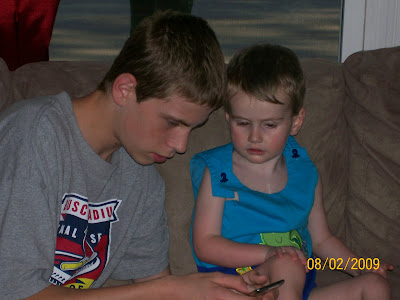 Posted by Erin Beckemeier at 8:41 AM 2 comments:

they may not be doing any ablation in the cath lab. It is likely going to be more of a diagnostic cath. They may do an EP study, but it is probable that the ablation will be surgical, meaning Dr. Bove would do it while he's working on the valves.
Posted by Erin Beckemeier at 6:32 PM 2 comments:

U of M should be calling in the next day or two to give us the date for the catheter ablation. Dr. Bromberg just emailed and said that it will be done in Michigan, probably 1 or 2 days before surgery, which would push up the pre-op stuff to the day before the cath. Looks like we'll be heading to Ann Arbor the weekend of 8/22-8/23.

This is still so unreal. I'm sure it will sink in the closer we get. Right now we're just on a pink cloud that we have hope for a surgical repair and can avoid any more talk about transplanting!
Posted by Erin Beckemeier at 4:27 PM 3 comments:

Michigan just called a little bit ago and said that Dr. Bove is offering us surgery on 8/27/09 for aortic and mitral valve repair with a pre-op day on 8/26/09. We're still waiting to hear where or when anything will be done with the atrial flutter, either in the cath lab or during surgery.

We are thrilled that our little man has a chance at a repair of his own heart rather than transplantation! Again, thank you prayer warriors for lifting Connie up. Now we just need to focus our prayers on staying healthy until the surgery date and that God will guide the medical team that cares for him before surgery and during recovery.

We'll update more when we have more info.
Posted by Erin Beckemeier at 11:31 AM 3 comments:

I received an email from Dr. Bromberg saying,
"Received a note from Dr. Bove Friday evening. He was on vacation. Hadn't seen the echo yet, but sounded inclined toward valve surgery. Hopefully will have a definitive recommendation early in the week."

Just thought I'd brighten your day since mine's a little brighter today!!
Posted by Erin Beckemeier at 9:48 AM 2 comments: