Jesus,
Please welcome this brave heart warrior home with open arms. We trust you've restored him to perfection and hope to someday see his gigantic smile greet us when we, too, will enter your kingdom. In your name we pray, Amen.
Posted by Erin Beckemeier at 7:46 AM 6 comments:

Well, turning three years old is a big deal in many respects. For kids who get special services (early intervention) it means that the birth-three services end and the school district takes over continuing services if a child is "eligible" to receive services. A couple months ago we started the process of determining eligibility (testing) and today we had the meeting to go over the results. Drum roll please...

That's right, our boy has made so much progress thanks to Ms. Chris, Ms. Deb, Ms. Carla, Ms. Jen, his doctors and nurses and of course his family that he scored too high on the testing to qualify for speech/language or PT services. HOWEVER, because he has had so many ongoing health issues, hospitalizations, etc. he is still slightly below his peers in the area of communication and gross motor development so the district's philosophy is that it's better to give him services now rather than waiting until he's five or six and then saying, "Oh, he's fallen behind and now it will impact his education." They will use his cardiac issues to give him a diagnosis of "Other Health Impaired" which will give him to opportunity to receive speech and PT services in a preschool setting. Some kids just go to therapy a couple times a week and meet one on one or in a small group with a therapist, but the team felt strongly that he would get the most benefit from being around typically developing peers as models for speech and motor development. Therefore, he will go to preschool two mornings a week in a class of 14 students, most of which are typically developing children. He will have two teachers and an aide and throughout the day, PT and Speech therapists will push in to his class and work with him or any other kids who need those services as well. Then one morning a week he will be in a small class of five students who are all working on speech issues. The best part for him is that he will get to ride a school bus! We are going to start by taking him and picking him up for a while, but they said that once the kids see their friends riding the bus they start asking for it too. I'm sure once the new baby is here and we're juggling nursing with MK's preschool schedule, etc. it will be nice to have that convenience available!

Tomorrow we'll take him to see his classroom and meet his teachers and classmates and then he will have his first official day on Thursday. Please pray for him and us as we make this transition. Being a teacher, I want him to love school and it seems that he does love his little class he's been going to once a week, but this is a big step for him and in a new building with new faces and a lot more kids! Pray that God helps him be open to all the joy and fun and exciting times that await him.
Posted by Erin Beckemeier at 1:18 PM 5 comments:

Gus has taken a turn for the worse. He's been losing a lot of blood. Losing it faster than they can replace it. He has to be on blood thinners so that his LVAD (pump) doesn't get clots, but that therapy is causing him to not be able to clot. Additionally, he suffered a stroke this morning and has blood on the brain, causing continual seizures throughout the day. This has affected his status on the transplant list, causing him to be removed for now. Please pray for this family and this child-that God will comfort them all. Greg and I have been pretty shaken by his story.

We invited grandparents, aunts and uncles and cousins over today to celebrate Connie's third birthday (coming up on Wednesday). He had a great time and even sang the "Happy Birthday" song to himself! It was so cute and so fun to think how far he's come. Speaking of how far he has come, we had to say goodbye last week to Connie's wonderful First Steps therapists who have been coming to the house weekly for the last 28 months. There were times that he would have 4 visits a week from the various therapists. He was down to just speech therapy weekly and physical therapy once every other month. He was recently evaluated by our local school district to determine eligibility and whether or not he will continue receiving services. We have our meeting with them tomorrow to go over the results and I'll let you know how it goes. We are so proud of how far he's come! 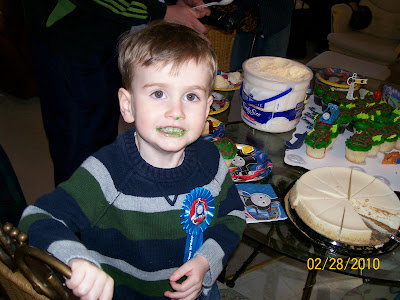 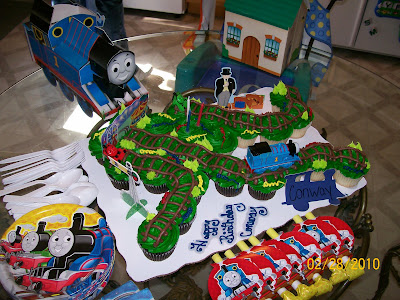