We had our follow-up visit today and we were there the full two hours Colleen told us to plan on. He had all the routine checks along with pacemaker stuff and an echo.
Pacemaker Issue:
Dr. Bromberg was disappointed because we were unable to change the mode switch setting to go to 90 whenever he goes into Atrial Flutter. Right now it is set at 100, which is where he gets paced when his heart rate is too low also. So now, if he's at 100, we won't really know if he's in flutter or if he's just too low and needed to be paced. Normally, his rate when he's active is higher than 100 so as long as we check him while he's up and moving, and he's over 100, we should feel pretty confident that he's not in flutter or having rhythm issues. Since pacemakers were designed for adults and not kids, they didn't make them adjustable on the mode switch because adults can tell when they are having rhythm issues and communicate that. Kids can't. So, we'll have to wait for him to get old enough to tell us or for Medtronic to write new software programs that have that capability.
Echo:
At first, Dr. Bromberg described his LV function as "the squeeze not being quite as brisk". When the tech said she thought it had improved based on some other angles and showed him these, he agreed. He said the only difference he sees now is that the tricuspid valve, which has Ebstein's Anomaly, is leaking a "fair amount". Apparently this is an increase from "mild to moderate". He said that the good news is that if you have to have a leak get worse, that's the valve you'd want because it doesn't impact the LV function. For the first time, they tried taking measurements of the function to have a baseline to compare it to. In the past they have done this more from eyeballing it but this time they are actually plotting points and measuring. The tech said that it's not terribly accurate because of his anatomy and the angles of his ventricle due to the L-TGA, but they wanted to get it anyway. They also took a 3D look and got measurements that way too. She said she and Dr. Bruns would look at the numbers and try to see if they couldn't come up with a number for his current function. The number that came up on the 2D was 59%. I asked where it should be and she said it shouldn't be below 50%. Yikes!! He's only 9% higher! She reassured me that this number isn't totally accurate because of the shape of his ventricle and how it's tilted, that she thinks it's actually higher than that.
Lots of Little Things:
Connie has several issues going on that alone are of little concern. It's kind of the combination of a narrowed conduit, branch pulmonary stenosis, aortic insufficiency, pulmonary insufficiency and a leaky mitral valve that keep us a little more on our toes. Right now, the most problematic issue is probably the valves and so we are watching for symptoms of increasing tiredness or decreased activity levels and the big one, the one the doctor seems to be most concerned about, is how he is growing. He weighs 27.6 pounds as of today and a lack of growth indicates that it might be time to repair or replace a valve. He said you don't need perfect valves, but we don't want it to operate ineffectively to the point that it stresses the heart to where even after repair or replacement, the function doesn't return all the way. If he looks at his growth over a 4-6 month period and doesn't see much growth, he may decide it's time to think about surgery again.
Overall Picture:
Before the flutter, Connie was just being treated as a patient with valve insufficiency and was on track to be seen in the office once a year. Then we had this little hiccup with the flutter issue and some follow-ups stemming from that. He gets to come off the coumadin in one week and no more blood draws!!! After a follow-up in two months, if he's still doing well, he'll be back on the once a year schedule, as long as the flutter stays at bay--and he grows!
Posted by Erin Beckemeier at 4:03 PM No comments:

Congrats to Mommy and Sissy!

Connie helped celebrate Mommy's M.Ed. in Educational Administration along with big sister, Cece's First Communion on Sunday afternoon. It was a big, happy day for our family. Here are some pics. The first one was from Cece's school picnic on Saturday.

Coumadin Update: Connie went for his blood draw this morning and Greg had all kinds of issues getting it done. He was there over an hour. This despite the fact that last week I went through all the hoops of getting him set up as a "series patient" in hopes of avoiding trouble like this! To top it off, when I called Dr. Bromberg's office to get the results and find out what dose he wants him on based on those results, they said that their lab doesn't have the blood yet even and it won't be picked up from O'Fallon until 9pm tonight!! I was told last week that the Dr. would have the results by early afternoon as long as we got the draw before 10:15 when the first courier comes. To make a long story short, it's apparently a CIGNA issue. Have I mentioned lately how much I LOVE (sarcastic tone noted) that insurance company?! Bottom line: No results = No clue what dose he needs. 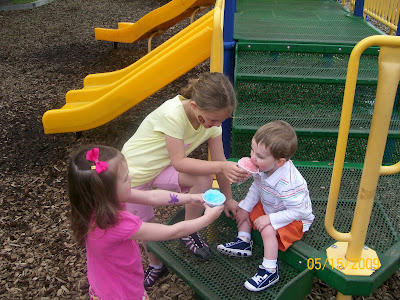 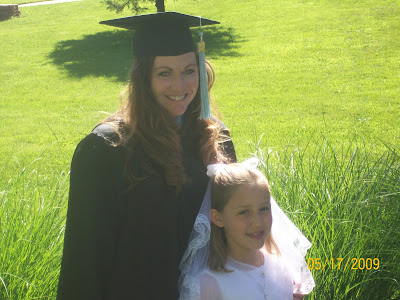 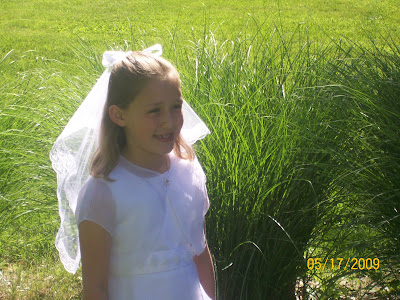 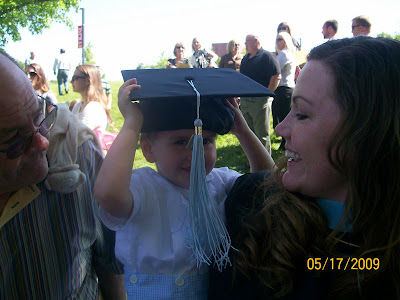