Well today was Connie's annual heart check up with Dr. Bromberg.  It was just about the last thing to check off our list of things to do this summer.  And what a summer it was! We were as busy as ever.  Mookie played lots of tennis, including a week away from home in Urbana, Illinois at a tennis camp at the University of Illinois.  She and some friends from school participated in an art camp and a robotics camp in town as well.  She even flew by herself to Chicago for a tennis tournament! Conway had scout camps, VBS and two sleep away camps, including his first year as a "big kid" camper at Camp Rhythm.  He had lots of fun and made new friends to boot! His other big news is that his wish to go to LEGOLAND was granted and we traveled to Orlando right after July 4th for 6 hot, but wonderful days enjoying the theme parks and all that the Give Kids the World Village had to offer.
Karsten and Frankie are doing well, too.  Kar will be starting kindergarten (primary) and finally gets to go to "Connie's school". Frankie is obsessed with Anna from Frozen and asking (demanding) for things all day long. Oh! I almost forgot.  We moved. Again. It took almost a month from start to finish, but we did it.  Hopefully it is the last time we will move... EVER! Tomorrow I am taking the kids to Dallas for a quick visit with grandparents and cousins before school starts.

Back to the appointment.  Things went great.  He is in the 94th percentile for height and 84th for weight.  All the routine questions and tests were a breeze.  We skipped the echo this time since he'd had one in January.  His pacemaker showed 2.5 years of battery life left.  However, when Dr. Bromberg came in, he shared that the lead issue we'd been following for close to the last two years is finally to a point where it needs to be dealt with.  He had us get a 24 hour holter monitor to track exactly how much his pacer is over sensing and delivering extra beats and skipped beats.  When listening, he hears an increase in the frequency, and the pacemaker interrogation backed that up.  He'll compare the holter results with last year's to be sure, and then consult with the team in Michigan that placed the pacemaker about getting on their surgical schedule to replace the atrial lead wire and the pacemaker battery itself, likely early this fall. It should take a couple weeks before we really know definitively what the plan will be.

Thanks for checking in! I want to post pictures soon!
Posted by Erin Beckemeier at 10:41 PM No comments:

I took Conway to school today (on a SATURDAY... you would have thought I was cutting off his arm the way he carried on this morning) to have his portraits taken for First Communion.  His actual First Communion is April 11 (all are welcome!).  After the portraits were finished I took a few snapshots with my phone.  I think this one turned out really cute and wanted to share it. 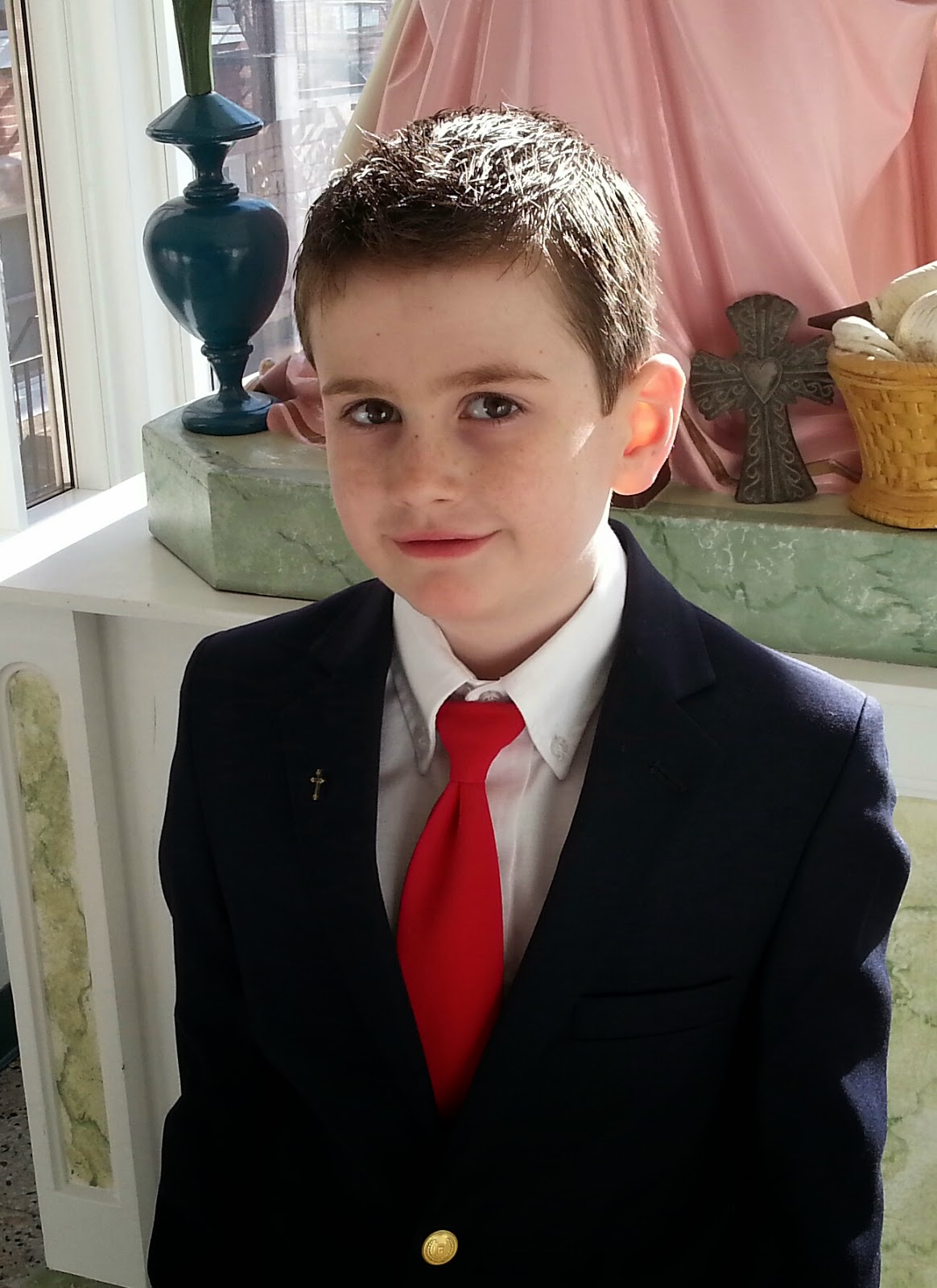 Greg and I were already on our way to the hospital this time 8 years ago.  Connie entered the world at 2pm on March 3rd and has been filling our lives with a deeper love than we knew we were capable of ever since. Here he is this morning before school.  He loves all things Nerf gun and is excited to share peanut butter cookies with his class today.  This evening we are celebrating with Grandma and Grandpa at Cracker Barrel and tomorrow evening he has a laser tag birthday party with his classmates. 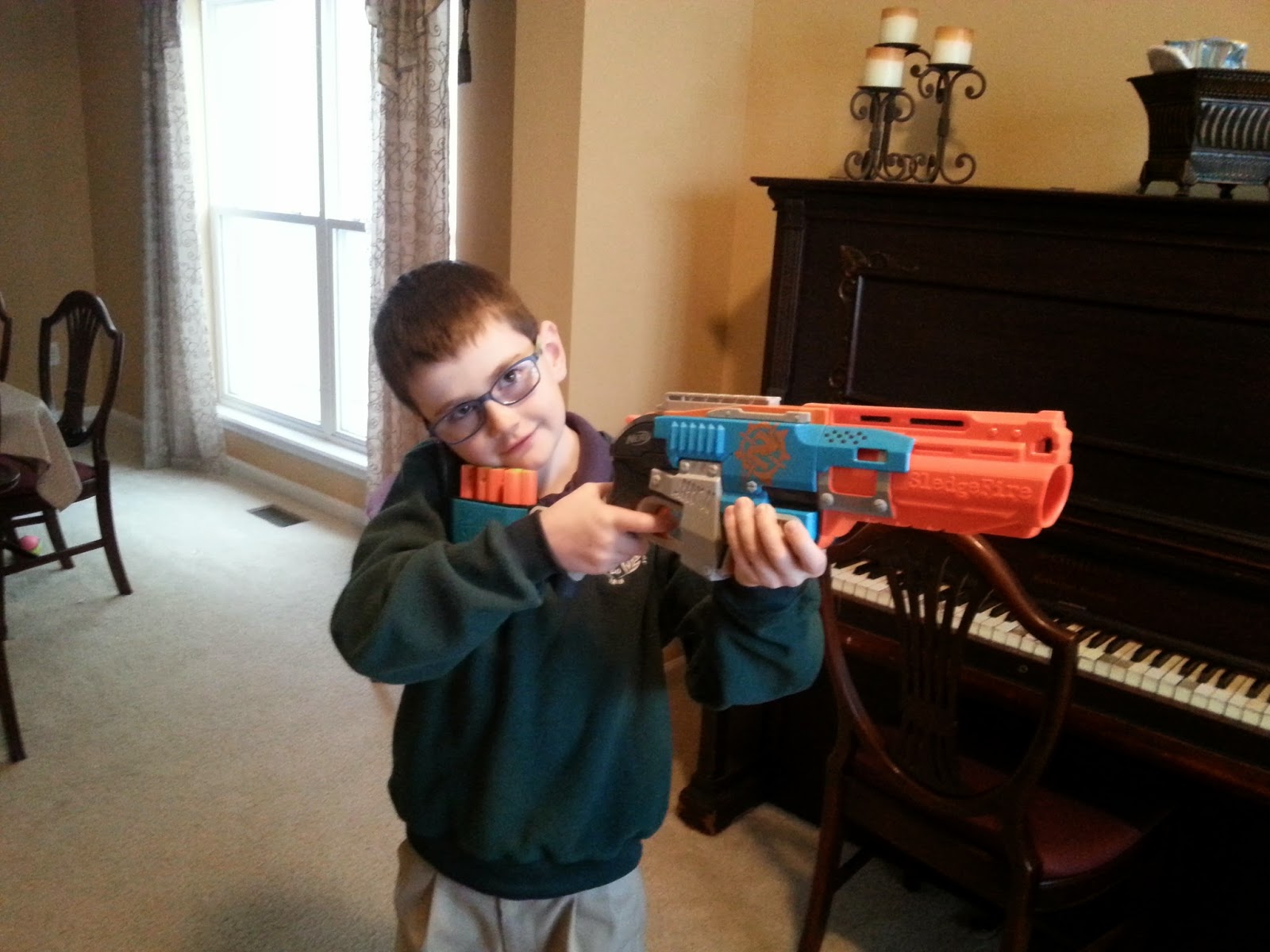 Connie saw his cardiologist this morning and, after 2+ hours we left feeling quite relieved.  His exam was normal, other than a bit of a louder murmur.  His echo was unchanged from August.  The doctor is blaming the elevated CRP test on inflammation due to a non-specific virus. He really made over the fact that Conway's chest x-ray looks so much better than the last one on file.  His heart has a nicer contoured shape and everything.  He said we were absolutely doing the right thing by bringing him in, and to come back in two weeks or so if the chest pain is still present and we will consider a stress test.  Thank you so much for the prayers!
Posted by Erin Beckemeier at 9:43 PM No comments:

Unplanned Visit to the Cardiologist

Conway has not felt himself the past week and a half or so.  Especially concerning are reports of chest pain, mainly during exercise in P.E. or when wrestling with Karsten at home. He looks pale and has cold extremities. We have done all we can do to avoid seeing the cardiologist, but after results of labwork came back yesterday, the pediatrician's office wants him seen by Dr. Bromberg today.  So far here is what we know: Chest x-ray is normal, CBC red/white blood cell counts are normal, pacemaker check was normal, holter monitor last week of Dec. was normal.  He had two labs come back funny yesterday.  One was the sed. rate and the other was the C-Reactive Protein test.  It was high at a value of 13, where 0-1 is in the normal range.  This indicates inflammation.  We are unsure as to the cause.  Something minor like a virus could possibly explain the result, but he has had no fever and blood cell counts don't indicate he is fighting infection.  This test is used to measure risk for coronary artery disease, and given the chest pain he's been experiencing, the pediatrician did not feel comfortable dismissing this lab result. Please pray for wisdom for the doctor today as he evaluates Connie, and ask God to provide Greg and me with peace as we watch the clock until the appointment.  My guess is that they will do an echo and possibly a stress (treadmill) test.
Posted by Erin Beckemeier at 6:42 AM 2 comments: