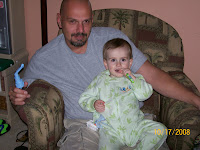 He's getting more and more cooperative with every breathing treatment. I snapped a pic last night of him just after his treatment ended. He was also helping brush his teeth! Never thought we'd see that day.
Posted by Erin Beckemeier at 10:26 PM No comments:

According to the DAY-C test, Conway scored at a 19 month level for physical development and his adaptive behavior and self-help skills are at an 18 month level!! He's right where he should be--whew!

It was so fun to see all the therapists in one room today. They were just in awe at our little man. He spent equal amounts of time making the rounds to everyone interacting on an individual basis and showing off his tricks and trying to ham it up for everyone. At one point, I told him to show them what he does when Mommy tries to change his pants and he got down on his back and started scooting backwards across the floor, just like he does during diaper changes. He laughed hysterically the whole time he was doing it, knowing he was making them laugh. It was so cute. That definitely convinced anyone who may have had a doubt that his receptive language skills are perfectly fine! He was so busy that for awhile his lips were noticeably blue. It was the first time I had ever seen that on him so I asked the rest of the team what they thought and they all agreed. I lost it. I started crying right there in front of them (thankfully only two of them were still here!) because I read a lot about heart kids and how when they are older, many of them have difficulty keeping up with peers at play and struggle in normal gym classes, etc. I guess I thought that Connie wouldn't be one of those heart kids and that was a realization for me that maybe he will be. I guess I was just in a celebration mode and reflecting on what a miracle he is and how far he's come in the last year and then to be looking at blue lips. . .it sort of took the wind out of my sails. I'm sure it's just because he's got some yucky lungs right now (thus the breathing treatments) so it makes sense that his O2 levels might be low during an illness. Still it's not pleasant to think about. I'm going to try not to dwell and just take it one day at a time. I'll probably let the doctor know about it tomorrow, but I'm sure they'll say just watch and keep up with the treatments and keep them posted. Stay tuned. . .
Posted by Erin Beckemeier at 9:22 PM No comments:

Connie had a runny nose all day yesterday and started developing a cough as well. He got up at 1am and didn't go back to sleep until 4:30am! We tried everything. He and I ended up watching some Pinky Dinky Doo on the computer and vegging on the couch for awhile. I gave him some graham crackers and raisins and ice water and you would have thought he hadn't eaten in a month. When I unzipped his pajamas to take his temperature under his arm, I noticed some "pulling"--drawing in around his ribs with each breath. I also felt like his breathing was labored. He was happy but couldn't sleep and it seemed like being upright was easier for him to breathe. He was very "junky" sounding. To make a long story short, Greg took him to the pediatrician this afternoon and we now have a nebulizer and Connie is on Albuterol and Pulmocort. He got his first breathing treatment in the doctor's office and immediately had relief and had clearer sounding lungs. Granted, he screamed through the entire treatment, which takes close to 10 minutes to give. At his evening treatment, we used a different head on the machine. Instead of the mask, we used a straw-like attachment and it was received much better. Say some prayers that he'll cooperate for these treatments so that he'll breathe easier. Also, tuck my mother in your prayers as she is recovering from pneumonia. She should be discharged from the hospital sometime tomorrow after a four day stay.

His IFSP meeting is tomorrow afternoon. It will be such a relief to hear again how great he's doing, but it will be bittersweet as it may be the last time we'll see some of his therapists. We are so thankful and feel so blessed to have had such wonderful individuals in our life the last year.
Posted by Erin Beckemeier at 8:31 PM 1 comment: