Connie has had loose stools for about 6 days now. He normally has one bowel movement every other day (since we've been home from MI) and now he has been having at least three every day and they are loose. The GI doctor wanted him to come in and so we did and guess what?! His weight is up! He was 22 lbs. 15.5 oz and last week he was 22 lbs. 8 oz. Not sure how that happened, but my guess is, that even though his stooling and vomiting have increased, that the weight gain can be attributed to the increased calories from the Peptamin Jr. (new formula). It is 30 cal/oz as opposed to 20 cal/oz of breastmilk. Of course, he's only getting about 4 oz of this new stuff per day, but I guess it's already making a difference.

Anyway, the doctor said that she feels like the formula is what is causing it. Apria Healthcare is who supplies the formula (you can't find it on store shelves) and they were out of what she prescribed so they sent a substitute. It doesn't have "prebio" or fiber, apparently two things he needs. So, after waiting a week and a half to get ANYTHING, they send the WRONG THING! Luckily we got some samples that will hopefully tide us over until we get the right stuff. If the loose stools continue past Monday, she wants to send a stool sample off for a culture and possibly start adding some sort of fiber powder to his milk. Thanks for checking in. Also, please add 5 year old Gerri to your prayers. She had her double switch today at the same hospital with the same surgeon as Connie, almost 7 months to the day of his surgery. She is recovering and has a long road ahead. Their family is not from this country, so it complicates things further. Please pray for them.
Posted by Erin Beckemeier at 6:17 PM No comments: 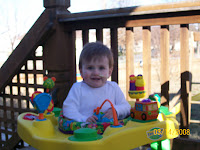 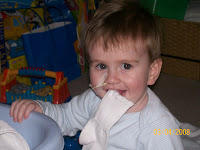 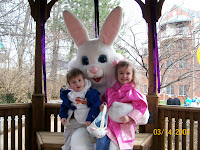 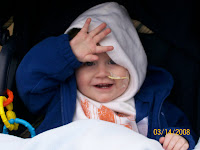 We had an Easter miracle today! We met God at Assumption Church during the 10 am Mass. He came right up to us after Mass. First for a little background. . . I have been thinking about Connie coming to church on Easter for some time now. I don't know why, but it was very important to me for him to be there, for us to be there as a family, all together. We haven't been to church all together since a month before Connie's surgery last August. He's been homebound all winter, but the cardiologist said he could start going out in public now that the flu season is just about over. I guess one reason it was so important was because last Easter he was baptized and we had so many question marks about what the future would hold for him and now, one year later, he is getting back on track. He's here and that's all that matters. It feels like we've come full circle or something. Anyway, we all went to church and I was happy (then I remembered how hard it is to entertain a one year old for over an hour!).

They added extra folding chairs to the end of each pew and we were in the front row in a regular pew. Across from us, right as Mass was beginning, an older gentleman with a listening assist device came to sit alone in that one extra seat at the end of the pew. During the "peace" he reached across and shook my hand. I've never seen him before or met him and we've been attending this church for five years. After Mass was over and people began to leave, he came up to me as I was holding Connie and asked what was wrong (meaning what was wrong with Connie. I guess he could tell something wasn't *normal* because of Connie's NG tube). I answered, "His heart." I pulled his shirt down a bit so the top of his scar showed and the man very matter-of-factly said, "God spoke to me and told me that it is time for this child to be healed. He told me to lay hands on him so that he might be healed." and then the man put his hand on Connie's back and said, "In the name of Jesus Christ be healed." and then he walked away. It's an Easter Miracle!

Lord, thank you for sending your servant to us today in order that you might heal our precious boy. We believe that you have the power to heal anything, no matter how big or how serious. We thank you for getting Connie to this point. We know that it is because of you that he is alive and getting better everyday and we look forward to watching him continue to grow and lead a happy, healthy life. In Jesus' name we pray, Amen.
Posted by Erin Beckemeier at 5:02 PM 1 comment: