Just wanted to pop on and tell everyone that Connie is doing well. It's been a little over a month since the last update so I thought I'd pass on a few new things about him.

He is tolerating the heat far better than he ever has in the past. Everytime we're out and about I think to myself how "we couldn't have brought him to this last year" or "how miserable he was last year at this".

We took him on his first "train" ride recently to Union Station via the MetroLink. We ate lunch at the Hard Rock Cafe and fed the fish. He loved it! 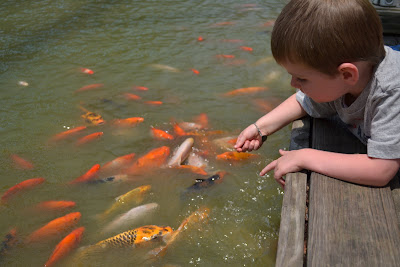 July 4th has come and gone and even though the parade was a little rainy, he had fun for most of it. Patience is not his strongest skill and there was a lot of waiting. Waiting for the floats and candy. Waiting for the fireworks to start. This year he was also brave enough for the rides at the carnival AND the fireworks. He was very disappointed that he didn't meet the height requirements for most of the more thrilling rides so I've convinced him that certain foods (fruits and vegetables) will help him grow bigger so that he can ride them soon.

Connie has developed a passion for the water. Last summer he would barely let go of the sides of the pool and never even think about putting his head in the water. This year he is jumping off the side and going under. He can even jump in and swim under water across the pool! His favorite thing to do in the pool is to have Greg throw him in. He's so fun to watch. We went to Raging Rivers earlier in the week and he even did the water slides. His favorite activity there was the giant wave pool. 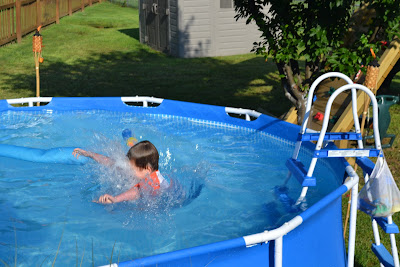 It seems like summer is already winding down, unfortunately. We got a postcard in the mail from his preschool and he'll be attending on M, W and Th mornings. He's all set with his James (from Thomas the Tank Engine) backpack and he chose a green binder to be his portfolio. We put a Thomas cover on the binder and he's excited to ride the school bus again.

Soccer has kind of come to a stand still. The last two weeks have been cancelled due to the high heat so hopefully it'll cool down here enough soon that he can get back out there. Practices for his fall team at Assumption will likely begin after Aug. 1.
Posted by Erin Beckemeier at 7:16 AM 3 comments: