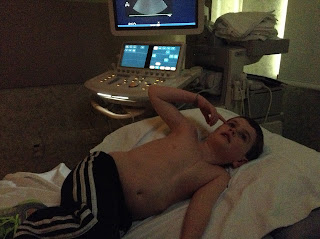 On another positive note, Connie just received his third quarter report card, reflecting a boy that is on target in all areas except PE and handwriting. He just started working with an OT, Mrs. Debbie, who is quite impressed with him already. He lacks some endurance in his upper body and tires when doing small motor tasks so he's been given some chores to do around the house to help him build some muscle. I expect now that the weather is improving he'll be building a lot more strength with all the playing outside. Just the few nice days we've had lately, I have already observed a significant improvement in his stamina and interest in playing outside. He's gaining coordination and balance too, by riding his razor scooter for long periods of time. Who knows? We may even end up attempting to learn to ride a two wheeler by the end of summer! We hope to write another post very soon to announce the birth of Conway's new baby sister. I'm scheduled to be induced on 4/7 if she hasn't come on her own by then.
Posted by Erin Beckemeier at 8:16 PM

What a wonderful report. Looking forward to keeping up with the new little one, as well. Thank you for keeping all who care about Conway and his family updated.
Sincerely,
Jean Tate

This is just wonderful news, Erin! I can't stop thanking God for this beautiful boy, and his strong, trusting parents.Be sure my prayers will continue for him and for you and the new baby girl as well. Love and prayers always,
Sr Josephine