Connie was a very good trick or treater this year. We brought the wagon, but he did quite a bit of walking himself, which was both good for him and for us to see. He was a dragon, but he didn't care for the wings so he looked more like a dinosaur. Oh well. For some reason, he thought it was okay to reach into the candy bowls himself and to try to go into people's houses. After a few houses, he learned to just hold out his monster candy bucket-which became too heavy for him rather quickly. He told everyone "Happy Halloween" but it came out more like "Happyween." He also would tell everyone he was a dragon and roar in a scary voice. It made everyone laugh. His sisters got candy from the firefighters and saw the big truck, but he was already in his pajamas so he missed it. I got to see lots of my former students and parents, including one who moved away but still comes back to the old neighborhood to trick or treat. When we got back to Grandma and Grandpa's house, he loaded up on candy and then was completely delerious! He was so tired (up about an hour after bedtime) and yet so full of sugar that he was literally running in circles but almost falling constantly. It was funny to watch. He fell asleep on the way home and slept all night long in his big boy bed.
The kids with their cousins 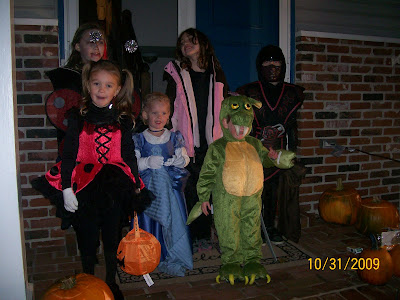 A close-up of the scary dragon 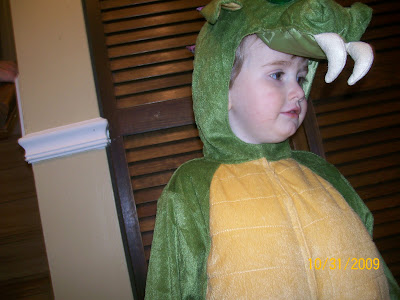 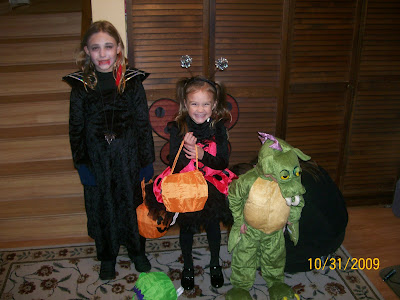 Connie digging into his haul 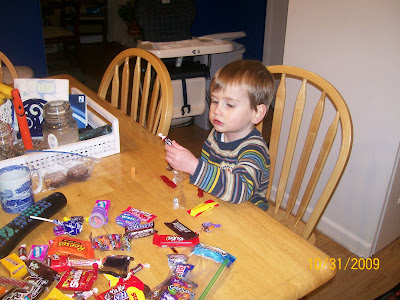 Posted by Erin Beckemeier at 9:40 PM

Precious pictures, and I love the account of events. I can picture him running around in a sugar fit! We have much to thank God for, but will continue prayers for all. Much love always, Sister Josephine