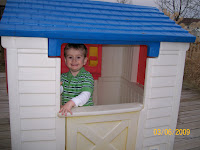 Conway went to Dr. Davis for his two year check-up today. I waited a few weeks after his birthday so I could take him during my spring break. He weighed in at 26 lbs. 4 oz. which puts him barely at the 25th percentile. Looks like we'll be keeping the whole milk for another year and trying to add in some good calories where ever we can. He loves "nog nog" (carnation instant breakfast chocolate flavor) added to his milk so that's one snack we'll be trying to make sure he has everyday. He's 34.5 inches tall which is in the 60th percentile for height. I'm not too worried considering Mary Kathleen had almost the exact same stats at her two year check-up. She was 34.5 inches and 25.4 lbs. Of course, she's a girl, but still. Now she's in the 75th percentile for height and weight!

Dr. Davis said that since he isn't putting two words together yet (like saying "dog bark") that we might want to consider increasing his speech therapy. He is happy to see that his receptive language is on target though. He passed all the little screenings for autism and lead poisoning. He had his lead levels checked several weeks ago when his dig levels were checked for Dr. Bromberg so we already knew that wasn't a concern.

I asked Dr. Davis about his opinion on Connie getting an April dose of Synagis, the vaccine for RSV that preemies and heart kids get from Nov-March for the first two years of life. He said that since Connie will be starting "preschool" next week that it would be a good idea to get one more dose in since the RSV season is running late this year. That means that most of the cases they've seen have been recently and the season isn't "over" yet. We put a call in to Dr. Bromberg and his nurse, Kelly, agreed that with being around other kids it would be a good idea. So now they will try to coordinate benefits with insurance and insurance will probably deny and then we'll probably have to fight and write letters! Nothing is easy. It is all about money and the insurance company doesn't want to spend another $3300 for another month's injection.

Stay tuned next week for an update after Connie's first day of preschool. He'll be going to Ft. Zumwalt North's Child Care Lab three mornings a week for 2.5 hours per morning. Monday is an Open House where Daddy will stay with him the whole time and he'll get comfortable with his classroom and the new people. Then Tues, Weds and Thurs he'll go to "school". This program lasts until the middle of May. It should be a good experience for him to be around other kids his age. I'm hoping his speech development will really take off, but I'm crossing my fingers that all the winter germs are gone by then!
Posted by Erin Beckemeier at 6:15 PM