Conway has been in the O.R. since 7:30 am EST. I was able to gown up and go back with him and stay with him until he fell asleep. That was his biggest fear, that we would leave him. We are so grateful for the anesthesia team for letting this happen. Connie was crying a bit when they put the mask on his face, but after singing our ABC's all together, he was out. There was some issue with the consent form since it didn't say specifically he was getting a new valve. Dr. Bove came up to the waiting area and spent about 20 minutes going over the procedure again and his reason why he may go ahead and replace it along with the conduit. He is using an adult sized conduit, which may prove tricky to attach to his native valve. The fiddling with the connection might actually cause his already leaky valve to leak worse. This will likely give him a better outcome from this surgery. Also, future valve replacements could be made easier by having a uniformly sized and shaped valved conduit already in place. He said there is no reason why he couldn't get a melody valve (via catheter) in the future. He may need to take a baby aspirin daily for the rest of his life. We should be getting updates approximately hourly. Thank you for praying alongside us today.
Here he is in the pre-op holding sniffing all the flavors before deciding on fruit smoothie for his mask. 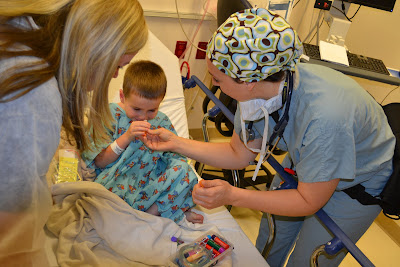 Posted by Erin Beckemeier at 7:37 AM

We're praying for your family and his caregivers. (We're friends of Lisa Richardson - our 23 yr. old was born with TGV atrium defect and he went thru some simliar surgeries when he was young.)