If we didn't have your address here's the prayer postcard we sent out. . . 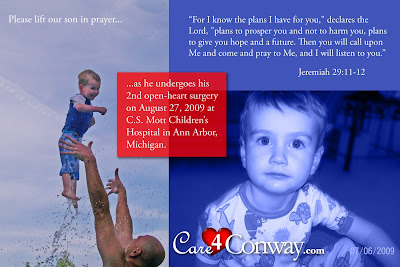 Greg and I both had some very sad moments last night. When I drove by Baue at Cave Springs yesterday there was a funeral procession heading into the cemetery and I started going to that scary place in my head thinking about the possibility of that being us someday in the near future. Then I started thinking where would Greg and I want him buried if that happened and thinking about Assumption's cemetery and then thinking about Mookie playing on the playground at Assumption someday and other kids seeing the name Beckemeier on a headstone and asking her if she was related to that person and what she would say or how she would feel. Then last night, as we were leaving soccer practice at Assumption, Greg was holding Connie and Connie kept pointing to the cemetery (you have to walk through it to get to the soccer fields) and saying something. Greg thinks he was saying "flowers" but he immediately got that creepy feeling and told Connie to stop pointing to the cemetery. We both feel better today, so that's good. I got up early and once I get Mook to school I'll get the finishing touches on the packing done.
Posted by Erin Beckemeier at 7:07 AM

Thanks so much for the postcard that is such a good idea. I have it on my frig to remind me everyday to pray. Connie is a special and very lucky little boy to have such a wonderfull mom. I know all to well how hard those "what if" feelings are. I haven't figured out yet how to make those feelings go away but I do know that all we can do is life for today. Today is a true "present" and blessing. And we will all hope and pray for tomorrow and everyday after.

If you guys need anything at all please let me know. I think of you daily.

Oh, I remember feeling just like you just a few weeks ago and remember who my sounding board was? who I just released all my inner fears to...it was you. I distinctly remember driving home from swimming and looking at Ella in my rearview mirror. She was smiling in her car seat. I suddenly was panicked that I may not see her do that again. Those feelings are normal to have, you are scared, but I truly believe that this surgery will not be as complex as his initial DS. It can't be....all I have heard is "The DS is the biggest surgery we do" Well, he already did that one!!
Call me anytime if you need to talk, scream whatever. I am here for you!!

We got the postcard, and have it on the fridge, too. You guys are most certainly in our prayers. As a loving mother and father, I'm sure those scary thoughts are not far from the surface. I pray that you might feel God's presence and comfort and His reassurance when you do...
Blessings,
Debbie

Think positive...Connie is a fighter and he has not given up yet. This is just one more battle. We all face them they are just different. I have been thinking/praying for you guys. The strangest thing, my neighbor's daughter here in KY, was born with half a heart. Obviously, not the situation anyone would want. Well, come to find out they had gone to Michigan for Meagan's surgery with Dr. Bove. Not sure all the details, but Meagan is a great 16-yr old girl who occassionally babysits my kids. Sweet, fun, and she is even on the hip-hop dance team. Debbie, my neighbor can not say enough good things about Dr. Bove. Just one more success story to think about as you move ahead. You have to know Connie is in the best hands possible. We will continue to pray for your safe travels, for Connie and for the wisdom of all those caring for him.
Jessica Martinez
P.S. Thanks for the cute card...my kids love looking at Connie's picture, online and on the refrigerator. They also pray for him nightly!

I'll be praying for you guys in the coming weeks. I know there may be some dark days in your future but my prayer is that you will be comforted and have a peace that only comes from Him.

We'll be praying for your family as you prepare for Michigan.

Keep us updated when you can!

Very scary feelings, and I think they are very normal. But treat them like a temptation--perhaps it's an attempt to undermine the faith that has kept you going for so long. GOD CARES and will not let go of you. You are in our constant prayers. I too posted the card for Connie where all the Sisters can see it and keep up their prayers. Love, Sr Josephine

I know those feelings well. Somehow we can't help having them, I guess. I saw your latest two updates & I'm glad you have made it to MI safely. Hopefully everyone will get a nap in sometime as needed. You are in our thoughts.