Connie is officially on the move. Last night he made his way from in front of the coffee table to in front of the love seat (about five feet away) and pulled himself up on my leg. He did it before I even realized what he was doing. Greg and I were talking and I looked down and he was standing up and holding on to my leg. He has fallen off of our bed (it didn't phase him) and seems afraid of nothing. Deb, the PT, said that is one thing that impresses her about him, that he's not afraid and that he's willing to try any new skill. We figured out how to adjust the wheels on his walk-behind toy so that doesn't roll quite so easily and he now can stand at it and take a couple of steps without us holding on to the toy! Today was our first day trying the 50/50 blend of formula and breastmilk and he threw up the first two attempts. I started to get bummed, thinking we were going to have to go back, but the next two he did fine and didn't even flinch. I think that the problem is we went from 220ml's two weeks ago to 205 mls last week (we could go down on volume and get the same total calories/feed since we were introducing a more caloric fluid)and then up to 230 mls this week. We want him to be at 250 mls by the time he gets to 100% new formula so that would be 230 this week, 240 next week and then 250! So, it's hard to tell if he was struggling with the increased volume, the concentration, or neither. Since he kept the last two feeds down we'll continue with this plan tomorrow and see how he does. Hopefully he does as well as he has with the past adjustments.

Connie's cousin, Liam, came over today. After their afternoon naps they played outside together until it got cool. Inside, Connie was very good about sharing and showing his younger cousin how to shoot hoops and bang toys together. He needs a little practice being gentle. He gave Liam "love pats" with about the same level of force that he does the dog (i.e, too hard!). Here are a couple pics of the boys hanging out under the swingset and Connie with his walking toy and Grandma Marybelle. Enjoy! 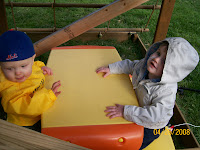 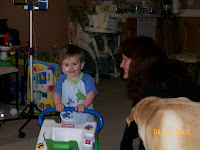 We are so thankful and pleased with the progress Connie is making. It is so hard to believe that 8 months ago exactly I was packing for our trip to Michigan and the start of this whole ordeal. What an amazing journey it has been! I've learned so much about myself, God and even medical terms I wish I didn't know. God has also shown Himself to me through so many of you and many others out there who don't even realize how they've touched us. We are so blessed. I want to remember this feeling for a long time. Hopefully I'll remember it the next time a challenging situation presents itself :)
Posted by Erin Beckemeier at 11:15 PM