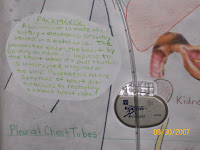 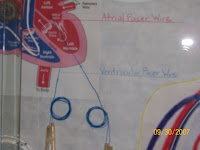 It seems as though Brother has the sniffles. He generally sounds congested in the mornings after laying all night (even though his bed is inclined) but it goes away after he's up for awhile. Well, today, his nose is like a little faucet. One sneeze and out comes gobs of goo. Not the typical drainage just from having the tube up there. We've gotten out the bulb syringe and are trying avidly to keep all of it from ending up in his tummy or worse yet caught at the back of his throat where it makes him constantly gaggy. He's been sneezing more and having a hard time sleeping more than an hour because all the gunk makes it hard for him to breathe. Please pray that this passes soon and he gets some rest and has an easier time breathing.
Posted by Erin Beckemeier at 4:06 PM

I really like this website. Like the pictures, especially. Hope and pray that tonight is better for both you and Connie. Those bouts of nausea are so hard on him when he is tired and trying to sleep. Worse part is not being able to help him thru it. We enjoyed being with all three kids last night. I'm so thankful we are able to help out so you and Greg can get out of the house for a while.

PS - Erin, I clicked on anonymous and didn't have to go thru all that Google sign up or anything. MOM

Erin, Do you think one of those electric suction pumps for Connie's nasal and throat would help? If so we will try and find one. Also check with the nurse.
Love Dad