We Got the Beat! A reunion for U of M patients with complex CHD's

We made an impromptu visit to Ann Arbor, MI this weekend. Don't worry! Conway is fine. We went for a reunion for University of Michigan Congenital Heart patients. I read about it online Thursday evening and Friday morning while the kids were at VBS, I coordinated with our contact at the Holiday Inn for a room and asked another parent to take over coaching duties for MK's softball game that night (Thanks, Pohlman's!). Right after I picked the kids up from VBS we loaded up for the 9 hour drive. Greg had work to do so I took them by myself. I'm sure if I'd had more time to plan, I would have talked myself out of it, but I was excited and running on adrenaline, I guess! Needless to say, we had a couple of traffic snafus on the way up, so the drive ended up being about 10 hours, but the kids were great the whole weekend and had so much fun. My thinking behind going was that it would be good for Connie to form some relationships with the doctors and staff in a non-threatening environment so that when we go next month for surgery he feels more comfortable. Also, I thought it wouldn't hurt for them to get to know him a little better when he's not sedated... to see him as a real little boy and to see a glimpse of his personality, hoping it would strengthen their desire to do their absolute best for him. We were not disappointed! We saw God's hand in little things the entire day. The sun was shining, the temps were in the 80's, the facility was amazingly clean, Karsten was good despite missing his nap-even after being up until 11 the night before, and the list goes on. Here are some of the best pictures from the event. Connie riding a pony. Normally not noteworthy, but this child was terrified prior to this day of riding anything! Turned out to be his favorite activity! 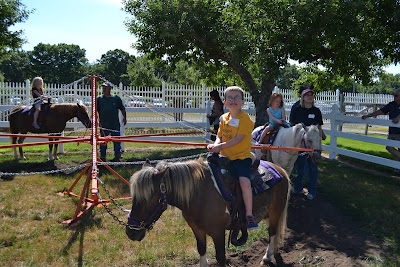 It took him a while to climb to the top of this slide (sorry to the kids in line behind him!), but look at the joy on their faces as they slid down. 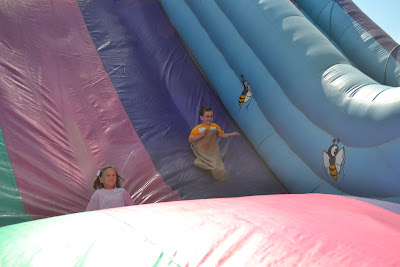 Bubbles the clown made every kid a balloon animal. Conway chose a dog, MK a bunny and Karsten a giraffe. 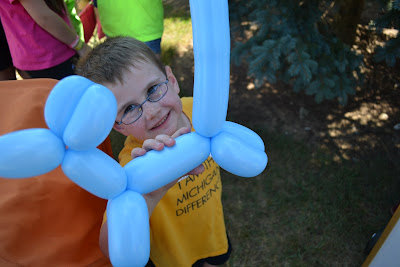 Showing off his new shirt 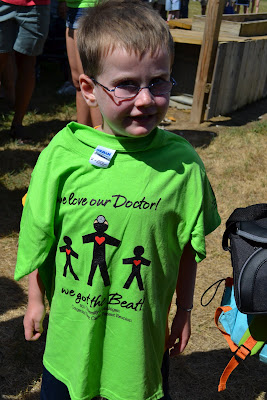 The man of the hour, Dr. Bove. I wish I could have captured the look on his face when he realized who was approaching him. We had been waiting in a line for about 30 minutes, they had professional photographers, etc. You could tell the doctor was looking at everyone's nametags and trying to figure out who people were. He's done 10,000 surgeries since he's been at U of M, so he likely doesn't remember every case. I knew he wouldn't recognize Connie because he was only 2 the last time he saw him. When he read Conway's nametag, you could see the awe in his eyes. I'm not making this up. He looked up at me and beamed with joy. He shook his head as he uttered, "He looks amazing!" He was referring to the fact that he took such a hit neurologically after the first surgery and it was obvious to him that he had overcome so very much. That one look from the doctor made all the time in the car and the fuss of packing all worth it. It was like a reassurance for both him and me that miracles really do still happen, and Connie is one of them. 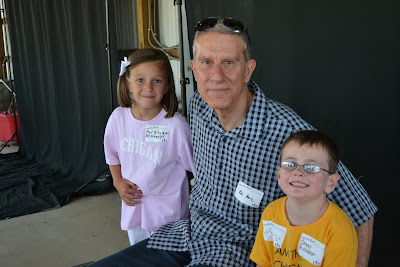 The man on the right is Dr. Bradley, the electrophysiologist who was able to successfully ablate Connie's atrial flutter in 2009. You have no idea the peace that came over me when this man actually knew the date of Connie's upcoming surgery. It's almost a month away and he's not even a regular patient in their clinic! As soon as he saw us he remarked about how amazed he was that we made the trip and that he looked forward to seeing us again on the 13th of July. What a professional!! The doctor on the left is one of his trainees. Connie told Dr. Bradley that he wanted to be a boxer. Dr. Bradley agreed with me that he should stick to boxing on the XBox Kinect and keep up with bowling instead! Dr. Bradley and his team will handle the programming and initial monitoring of the new bi-ventricular pacemaker that Connie will be getting in July. 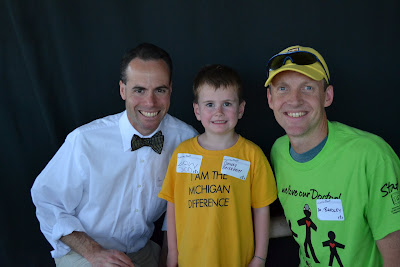 They printed the pictures of the kids with their doctors and gave them out, along with paper frames the kids could color and keep as souvenirs. Connie apparently thought a 3D frame was a better idea! 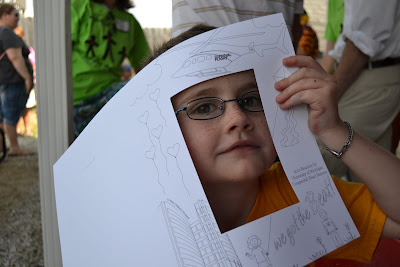 Karsten snuggling his new Bear Bear. We brought him a U of M bear back from our trip in November and it quickly became his lovey that he sleeps with. We decided we ought to get a back up. 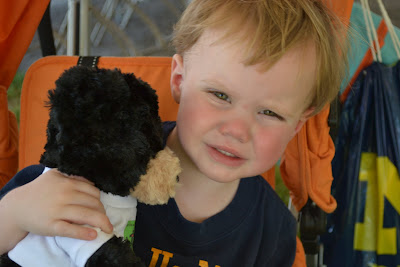 Another favorite memory is the Dunk a Doctor game. Connie was especially looking forward to this event and when he heard them announce Dr. Bradley as the doctor in the tank, he took off running! This man is so wonderful! He spotted Connie at the back of the line and pointed him out to his nurses. They started calling Conway's name until he came forward. They kindly explained to everyone he just butted that this was Connie's doctor and they wanted him to have a chance to dunk his own doctor. 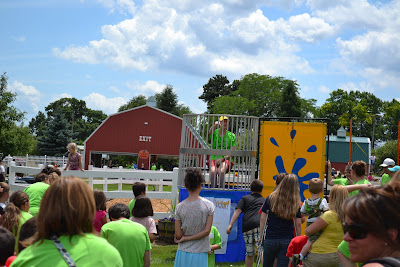 He gave it his best shot! 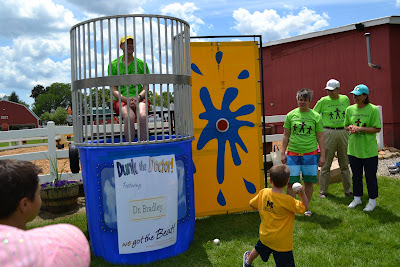 On the third throw, he nailed it! 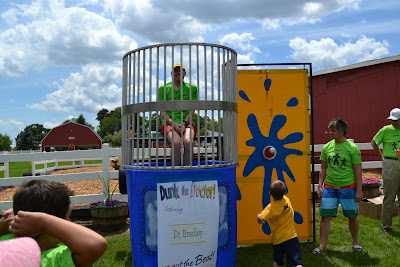 Down went the doctor and the crowd went wild! 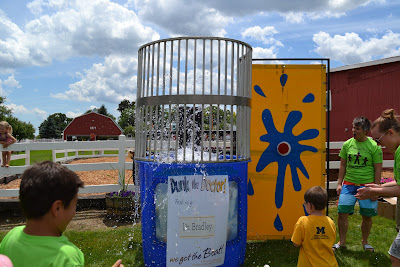 I love the look he gave Connie here! 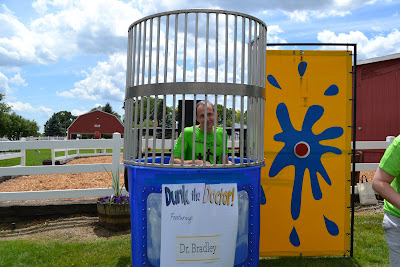 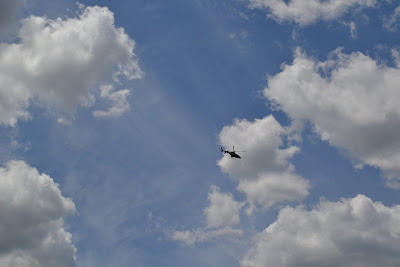 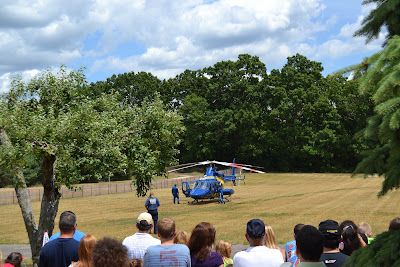 And what better way is there to end a perfect day than with a sno cone?! 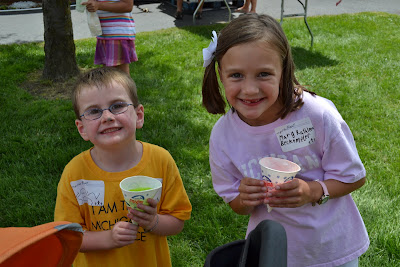 All in all, it was a great little weekend road trip, with lots of fun and memories had by everyone. Hopefully these happy times will help Connie be brave when he's faced with the not-so-happy hospital time coming up. On the drive we listened to his new Vacation Bible School music CD and one song is all about God being with you wherever you go and how God helps you to be strong and brave. I reminded him that God even goes to Michigan, and will help him be strong and brave for his surgery. Conway's surgeon, Dr. Bove, has been honored with an Endowed Professorship in Cardiac Surgery. This site tells more about it and this brief video gives a little insight into just what amazing things he has done over the course of his career to better the lives of children affected by congenital heart disease.
Posted by Erin Beckemeier at 9:44 PM 3 comments: